Stateside: The ethics of IAP are complex which is why the industry needs to define them

Because if we don't do it, others will

August 20th, 2013 - 05:11pm
By Carter Dotson, Stateside columnist
Chicago-based Carter Dotson is a senior writer at 148Apps.com, which was acquired by PocketGamer.biz publisher Steel Media in 2012.

Free-to-play has always been a hot topic.

But a lot of the heat in 2013 has come from heightened scrutiny of the model by government and the courts, especially given the 'Won't someone think of the kids?!' angle that fuels sensationalist headlines.

Well, it's time for the developers and store operators who traffic in free-to-play content to start doing something about it: they need to come together to create codes of ethics and best practices - before someone else does.

Consider that the scrutiny has come from fearsome sources: governments and the courts.

The UK Office of Fair Trading is still investigating whether free-to-play games run afoul of consumer protection regulations. There was the court settlement in the US, which could be 'worth' over $100 million as 23 million eligible class members are due a minimum of $5 in iTunes credit, if not cash refunds for qualifying purchases.

Although considering that it's mostly being paid back in to iTunes, it's hard to say how much Apple is actually losing.

And now Apple has published new rules about games with IAP that target youth. New protections will help, but what about the developers creating the content being bought?

They need to step up and voluntarily enact new protections and policies to ensure that in-app purchases are being bought knowingly, and with the full knowledge and approval of those who hold the purse-strings.

The mobile gaming industry needs to come together. The big companies, DeNA, King, etc. need to talk with indie bigwigs like Imangi Studios and NimbleBit, and even get some voices from those who focus on 'paymium' or eschew IAP altogether to discuss and craft best practices. 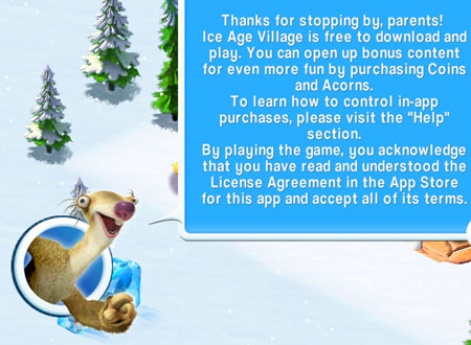 Do we need to see more - and much clearer versions - of this?

Big capital letters, multiple confirmations, whatever is necessary to inform the users of these apps that 'What you're about to do costs real money, not the virtual currencies we've offered'.

Setting limits as Smurfs Village did in terms of limiting the number of purchases in a short time-frame would help. But perhaps total limits or even just setting an industry-standard top amount for consumable IAP should be considered.

I mean, does anyone really need to be spending hundreds of dollars on smurfberries, anyway?

Now, it's easy to say these games shouldn't target kids in the first place, but that line is very blurry: adults like cute, casual games too.

Candy Crush Saga probably appeals to kids, but it's rather popular among adults who should know better too.

I'm a big, bearded, man's man (don't dispute that) who enjoys games where people's heads explode, but I also enjoy the charming antics of the bitizens in Tiny Tower and Pocket Planes, which are definitely kid-friendly games.

Should they be particularly regulated just because they appeal to ages 8-800? It may be better to be safe than sorry, but it would require a lot of hard discussion by the industry to figure out just where the line is with many of these casual-focused games.

The second key aspect of any self-regulated policies would have to be consumer-friendly refund policies.

Companies selling games in which accidental purchases by young people who might not know better occur need to be prepared from the outset to refund accidental purchases. Google makes it possible for developers to initiate refunds, and Apple needs to as well, and in a way that doesn't 'punish' developers by deducting 100 percent of the cost instead of the 70 percent cut.

Apple: you're a glorified payment processor on these consumable IAP transactions. You can take the fair hit.

Can you find the off switch?

The third thing that needs to be focused on is education - letting parents and customers know that these free apps have the ability to spend additional money in them, and why.

For parents especially, the existence of parental controls and how to enable them would go a long way, because they can be especially obscure on these devices among their labyrinthine settings menus. And yes, Apple, Google, and others can take steps to ensure that parental controls are easier to use, more prominent, and more extensive.

Right now, it's difficult if not impossible to disable IAP in specific apps, rather than system-wide on iOS. Child user accounts on phones and tablets, like what Google is starting to implement, would help too.

Frankly, everyone involved could be doing more to ensure that they're operating in an ethical and just way in this world where consumable IAP is the most effective way to make money.

There will be lots of scrutiny around this business model, and rightfully so, given the psychological tricks that many games play. But the industry can do itself a big favor by making sure that it takes steps to do the right thing.