Stateside: Why SteamOS threatens to outmanoeuvre the microconsoles

Mobile market has lost its momentum

September 25th, 2013 - 06:17pm
By Carter Dotson, Stateside columnist
Chicago-based Carter Dotson is a senior writer at 148Apps.com, which was acquired by PocketGamer.biz publisher Steel Media in 2012.

In announcing its new Linux-powered SteamOS, Valve may have just shut off the pipes for microconsoles.

Whether we're talking Ouya and GameStick, or the widely anticipated app-equipped devices expected from Apple and Google, the prospect of these tiny machines disrupting the console market now seems especially slim.

Why? Because a Steam-powered device for our TVs  whether via Valve's Steam Machines or a ready made piece of hardware  comes with masses of potential, and threatens to wipe the floor not only with Sony, Nintendo and Microsoft, but also the mobile market, too.

Firstly, Steam's library  and, indeed, userbase  is massive, and a large percentage of the platform's biggest games are perfect for TV-based play.

What's more, SteamBox puts the very model consoles have been built around for decades under threat.

Instead of focusing on physical media or even downloaded games, Steam's proposition includes the ability to stream games consumers already own from PC to a SteamOS box under your TV.

There's potential, then, that any SteamBox  or third-party hardware tapping into SteamOS  could deliver an especially cheap bit of hardware to consumers that opens the floodgates to its PC library.

That, in short, is microconsole territory, and there's even the possibility to integrate SteamOS into TVs themselves, putting existing smart TV platforms in peril and making Steam the go-to TV gaming choice.

The crux of it is, SteamOS has the potential to shake things up in all areas of the market.

Much of its content, for instance, is currently exclusive to PC, and the platform's well known sales could make it a much more attractive prospect for core gamers than either a PS4 or Xbox One.

With the new form factor, intrepid developers could possibly cater these new TV gamers with fresh content (either native to SteamOS or through streaming) that other systems just don't have.

As stated, this is a similar promise to the ones microconsoles make: fresh content on a budget in a market that's grown bloated and stale.

It had been believed that mobile platforms, such as Android and iOS, would spearhead the microconsole assault, posing a serious attack to the largely stable console market that's been fostered during the last couple of decades.

SteamOS, however, throws all that up in the air. Not only are Steam games more suitable that touch-focused titles for TV play, but  like PS Vita TV  any SteamBox would also benefit from having a major name behind it in the form of Valve.

For mobile developers, however, who thought they'd be able to reach new audiences via platforms they were already plugged into, this has to sting. 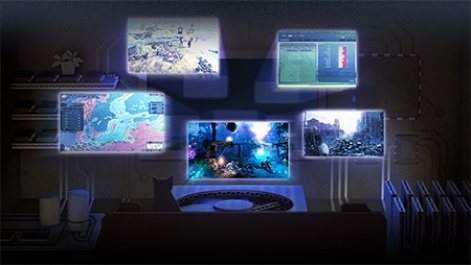 Sony lost the plot for large parts of the previous generation, with the PS3 getting off to a slow start. The company, however, has been learning its lessons. If PS Vita TV hits the west, it could be a big hit.

Likewise, Valve has transformed Steam from a largely disliked requirement for Half-Life 2 to the user-friendly 800-pound gorilla in PC gaming, and a veritable money printer for scores of developers on board.

As such, there's reason to be bullish about SteamOS' chances if it makes its way onto a microconsole.

Compare this to what the mobile market hasn't done with the hot iron that is the console market.

Ouya has stumbled out of the gate, its hardware aleady a generation behind top-line devices. Ouya's relationship with developers is also heading down the toilet.

This is a big problem, as Ouya relies on developers to serve up content. This holiday season  with GameStick and other competitors on the horizon  could be Ouya's undoing.

Google, too, could have done more. Google TV was an expensive flop, but it ignored gaming altogether. At an OS level, there's been no support for microconsoles and while Android has a controller protocol, it's almost a secret  the average user is unaware of it, given Google barely even promotes it.

Google could, and perhaps should, be doing more to make Android microconsoles a viable business.

And then we have Apple. The Cupertino giant has had three years to turn Apple TV into a viable gaming device - whether by running games natively or by turning AirPlay into a competent streaming protocol for gaming - but no such move has come to fruition.

Indeed, Apple's own controller protocol has only just been unveiled, and the company has failed in all respects to exploit the opportunity to move in on a market that's ripe for some Apple-style disruption.

Apple could have been behind the iPhone of microconsoles  perhaps it still could. But with other competent players now entering the market, that window of opportunity is fast closing.

Mobile developers have every right to be disappointed, too. With smartphone's gold rush now all but over for everyone but the lucky few, the prospect of triggering a similar rush on the TV was a very real one, yet Apple has held back.

I wouldn't count out Apple if it ever does decide to jump in, but it will be moving in on a market that's already maturing rather than  as one would like  leading the charge. What's more, as mighty as iOS may be on mobile, it would face a far sterner task trying to take on SteamOS.

But developers shouldn't be too depressed. All these platforms offer opportunities, even if  for mobile developers  working on Steam rather than Android or iOS represents an extra hurdle in the way.

Nevertheless, thanks to a combination of inaction and incompetence by the mobile market, the initiative has been lost, the baton handed over.

To put it bluntly, the ideal landscape for that mobile to TV transition may have just evaporated into steam. Reply
Chris Garcia
Microconsoles cost $79-$149 dollars.. Steam Machines will probably be hundreds more.. So I don't really think they put an end to them.. Not really the same market at all.
Posted 8 years, 7 months ago Reply
Nicolas Godement-Berline
Here's the rub though: is there still enough consumer interest for a dedicated device for TV gaming? Or even a device that also does other things (music, video...), yet remains gaming-centric at heart?

Wii, PS3 and Xbox360 shipped a cumulated ~260 millions units. It's likely this new generation will see a lower install base due to shift to mobile, and possibly non gaming centric TV devices such as set top boxes or Apple TV. It will also be fragmented across more devices : PS4, XboxOne, WiiU, SteamOS, PS Vita TV, some micro-consoles.

I expect the most succesful of these devices to ship no more than 30-40M units at the very best. Steam Machines will have a hard time at retail and will most likely remain somewhat of a niche platform, just like Steam today.

I think we're more likely to see real, strong TV gaming disruption from consumer devices such as set top boxes that also happens to run games. Those will ship in the 100s millions of units.
Posted 8 years, 7 months ago

Reply
Keith Andrew
Jon - I'm not sure people want mobile style games on their TV, I have to say. I think this, and Vita TV, are a far closer fit to consumer needs.
Posted 8 years, 7 months ago

Reply
Fraser Ross MacInnes Product/Design Director at Danke Games
I don't think the games we will get on Ouya or GameStick will be mobile style games, and I don't think average punters will think of them like that either - if it plugs into your TV, it's in the race.

Agree that Steam OS has nothing to do with trying to usurp mobile as a platform though - not sure Sony MS etc should be worried just yet though either. Upgradeable hardware is a pretty niche value proposition and one that doesn't really gel with the average living room customer. In that sense, the option to just buy a new box more often a la Ouya/Gamestick (provided it's cheap) is a more comfortable change in purchase behaviour for average customers.
Posted 8 years, 7 months ago

Reply
jon jordan
The games you get on a SteamBox aren't going to be mobile-style games though.

I think this is more of a move against Sony, Microsoft and Nintendo than Ouya and GameStick et al
Posted 8 years, 7 months ago

Reply
Fraser Ross MacInnes Product/Design Director at Danke Games
Much has happened in the last few weeks that suggests early entrants to the micro console space are very vulnerable. The Sony Vita TV and now this Steam box make the Ouya and the Gamestick look like hopelessly meek entrants to the gladiatorial ring.

One this is for sure, there is more movement technology wise in the console space now than there has been in any previous generation switch - signs of a sea change...
Posted 8 years, 7 months ago

Reply
Phil M
I never gave OUYA or any of the micro-consoles much of a chance, even without this Valve announcement, but this basically puts an end to all of them.

I still think Apple has a real chance if they upgrade Apple TV, but you have to ask yourself what's in it for them now? one thing's for sure and thats there can't be more than say 2 winners in all of this, and now we have 4 big players, Microsoft, Sony, Valve and Nintendo, does Apple really want to go up against them with a console which will be seen by many as inferior to their competitors? So if Apple do throw their hat into the ring, they are going to have to really go for it, otherwise they might as well just stay with mobile.
Posted 8 years, 7 months ago