The Charticle: Are paid games approaching the end of the line? 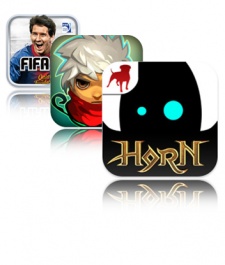 This is surprising for two reasons. Firstly, because Americans aren't supposed to be interested in soccer. Secondly, because it carries a $6.99 price tag.

After a period of argument and upheaval, the general consensus seems to be that freemium is the way forward and that any premium game is facing an uphill struggle. After all, a quick look at the top 20 grossing games for iPhone apps shows a freemium whitewash.

It seems that the only exceptions to be found are truly huge names in gaming  FIFA, Minecraft and Rovio's Bad Piggies  all of which have been featured extensively in App Stores worldwide.

And one look at Google Play's top grossing charts shows that conditions are even tougher on Android. Just two titles in the top 50 grossing games list are paid releases  Minecraft and Gameloft's movie tie-in The Dark Knight Rises.

What's more, across both Android and iOS, any grossing success for paid apps tends to be short-lived.
Bastion, for example, launched in August 2012 for the iPad, and carried a $4.99 price tag. Core gamers will have been familiar with the game from its Xbox 360 debut, where it launched to strong sales and considerable critical acclaim.

Its iPad re-release was greeted with a fresh batch of critical praise, and the game shot to number 5 in the iPad's top-grossing games chart within one day of release.

However, the game's sales quickly dropped off after this point, and the game is now ranked at #189.

On the horns of a dilemma

Take a look at Horn, and it's a similar story. The game's impressive visuals created a certain amount of pre-release hype for the game, and within one day of launch, it had climbed to #30 in the iPhone's top grossing games chart.

However, the $6.99 game steadily dropped in the rankings over the next few weeks.

On 19 September, with Horn ranked at #662 in the top grossing games chart, Zynga temporarily lowered its price to $2.99.

A sales spike followed, boosting the game to #121, but revenue quickly dropped off again, and Zynga reinstated the $6.99 price point.

With a little help from my brand

It would seem that there just aren't very many paid games that can achieve prolonged success with a premium price-point these days.

The only obvious exceptions to this rule are titles with considerable branded clout. The aforementioned Minecraft is a good example of this, and Activision's Wipeout is another.

This $1.99 game has been performing well in the iPhone top grossing games chart for more than a month now, but perhaps this has something to do with the fact that it's based on a US TV show that attracts millions of viewers.

A more interesting exception is Crustalli's Kick the Buddy: Second Kick. This 99c game broke into the iPhone top 100 grossing games chart two days after its launch, back in April 2012. It hasn't left since, and peaked at #10.

These games have achieved these ranks without the assistance of a globally recognised brand, and suggest  to varying extents  that it's still possible for paid games to find sustainable success on mobile.

Right now, however, they're very much the minority.

Reply
James Nouch
Hi Andrew. Thanks for taking the time to comment. There are clearly limitations to the data and what can be drawn from it, but given the lack of public analysis of app store data and the lack of comment, we think any attempt to look through to discern trends is a useful contribution.
Posted 7 years, 5 months ago

Reply
Andrew Traviss
You can't really draw any useful information from this data. Gross is pretty much useless on its own for comparing the viability of two completely different business models.