The Charticle: Real Racing 3's soft launch proves its monetisation but EA's going to have to tweak further

Australian gamers not yet convinced

February 18th, 2013 - 02:51pm
By Jon Jordan, Contributing Editor
Real Racing 3 isn't officially released until 28 February, but EA's soft-launch for its game has been extensive - and with good reason.

It's been available on iOS in Russia (population 143 million), South Korea (49 million), Australia (22 million) and New Zealand (4 million) since 14 February.

Clearly, this is a much bigger audience - six times bigger - than the 34 million Canadians who are typically used as a test-case market.

But that headline figure of 218 million aside, it's a very smart choice of countries in terms of their behaviour when it comes to free-to-play games.

Genie back in the bottle

This is a big issue for EA given that the first two games in the series were premium purchases (even if the second release included IAP).

As I argued last week, free-to-play racers can be very successful - think CSR Racing - but it's not an obvious model for the genre. And it's particularly difficult to introduce into a franchise that already has a strong fanbase of millions of hardcore gamers who like Real Racing just as it was.

That's why EA has chosen to soft-launch in Australia and New Zealand.

These markets are similar to Europe and North America in being broadly ambivalent to F2P, and also have particular interest in the Real Racing games as they're developed in Australia.

In contrast, Russia and Korea are strong free-to-play markets, where the business model has been used for years in PC games to overcome piracy.

By launching in these two different market sets, EA can gauge the initial reaction, as well as the response to the tweaks it's introducing during the soft launch period.

We can get a glimpse of this by checking out Real Racing 3's performance in the iOS charts.

It's performed best in Russia, hitting the #2 spot on the top grossing iPhone chart for apps; while in New Zealand it peaked at #17, and #18 in South Korea. Australia has been less welcoming - its peak to-date has been #30. 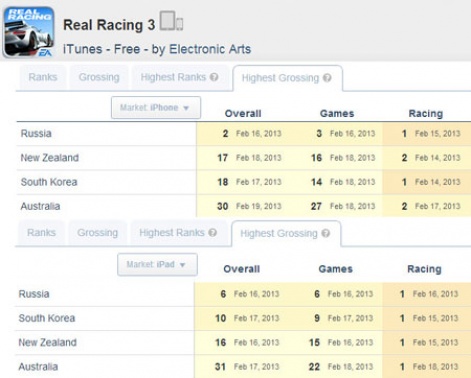 Looking at the game's performance on iPad, the basic pattern is repeated.

Of course, a soft launch can't be directly compared to the global launch.

For one thing, Apple hasn't featured the game, nor has EA kicked off its advertising and cross-promotional campaigns.

Still, in the 10 days until launch, I'm sure EA will want to see the game charting much higher in Australia.

Real Racing 3's success in Russia and Korea demonstrates the game monetises well, but given the reaction of a proportion of the existing fanbase, the challenge will be to tone down the pinch points while boosting the enjoyment that comes from spending and winning - exactly what EA appears to be doing.