The Charticle: Was free-to-play right for Real Racing 3? 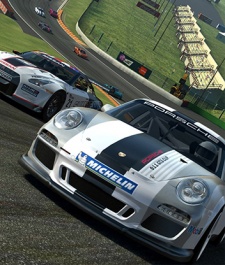 March 11th, 2013 - 05:16pm
By James Nouch, Staff Writer
It seems safe to say that EA's implementation of the free-to-play model in Real Racing 3 has been controversial.

As the latest installment in a series with a history of $4.99 price tags and an audience of core gamers, Real Racing 3's monetisation mechanics have inspired angry articles, harsh reviews and fan furore.

But has the shift to free-to-play been worth it?

A subsection of core gamers may angrily oppose EA's decision, but has the change had a positive impact on Real Racing's revenues? We examined the App Store charts in search of an answer.

At launch, Real Racing 3 quickly shot to the top of the download charts on iPad, helped along by a smattering of featured spots from Apple. The iPhone version entered the charts at #2, second to viral hit 4 Pics 1 Word.

Since then, downloads have remained strong, with EA's racer holding steady at number two or three in the iPhone charts throughout its launch week.

According to Distimo analyst Hendrik Koekkoek, these chart positions suggest that Real Racing 3 was generating roughly 120,000 downloads each day on US iPhones.

At the time of writing, eleven days after its US launch, Real Racing 3 is the sixth most downloaded app for US iPhones.

When it comes to the grossing charts, though, Real Racing 3 hasn't soared quite as high.

One reason for this, however, is that the top ten positions of the iOS grossing chart are becoming harder and harder to penetrate at launch, as the likes of Supercell and King.com are generating such huge sums from their existing audiences of engaged gamers.

So, with this in mind, we can see that Real Racing 3 enjoyed a steady climb through the top grossing games chart over its first few days of availability, starting out at #52 upon launch on Thursday 28 February, and reaching #12 by the end of its 'opening weekend' on Monday 4 March.

During this period, Real Racing 3 generated $315,000 in US revenue, according to estimates from Distimo.

The game peaked at #7 in the top grossing games chart a few days later, and has since dropped to #15, where it remains at the time of writing.

It will be interesting to see where Real Racing 3 goes from here. Careful tweaks to the monetisation mechanics (and the winding down of fan furore) could see Real Racing 3 remain in the top grossing charts for some time, perhaps even rising to join the consistent big-earners at the top of the grossing charts.

Alternatively, the new monetisation model and negative publicity could turn existing fans of the series away from its latest instalment, leaving EA with a title that's too hardcore to reach the scale necessary for sustained freemium mega-success.

Given the game's position on the App Store charts then, and the revenue estimates provided by Distimo analysts, it seems that Real Racing 3's shift to freemium has been a success, albeit a qualified one.

There's no question, however, that EA has made a tidy sum from the game already, although perhaps not as much as hoped.

Its predecessor, Real Racing 2, launched in December 2010  an age ago in App Store terms.

While the game's premium price point caused high grossing charts performance at launch, followed by the inevitable slow drop-off, it's worth noting that EA was able to manage this descent with considered price cuts.

As such, even in January 2012, more than a year after launch, Real Racing 2 was able to reach the heady heights of #25 in the US App Store's top grossing charts.

So was EA right to make Real Racing 3 free-to-play? Well, given the fact that The Simpsons: Tapped Out generated 26 percent of EA Mobile's Q3 sales, it's unsurprising that the company wants to apply the model elsewhere.

But only time will tell whether Real Racing 3's monetisation mechanic is the right match for its audience.

And if there's one thing we can learn from gaming uproars of the past, it's that outraged fans all-too-often become paying customers once a few weeks have passed. 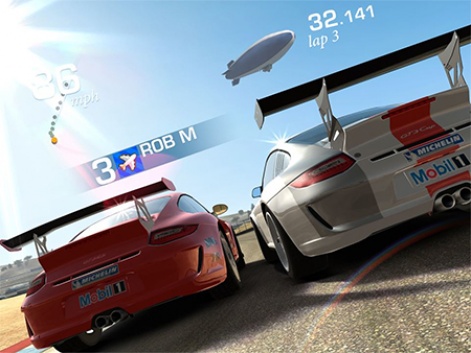 A note on the methodology of Distimo estimates
Distimo AppIQ provides download and revenue estimations for any app worldwide, based on daily sampling of transactional app data (>2.6 billion downloads / quarter) and publicly available information.

When calculating downloads and revenues for individual apps, Distimo's unique methodology excludes that apps transactional data from the analysis to preserve the confidentiality of their users' data.