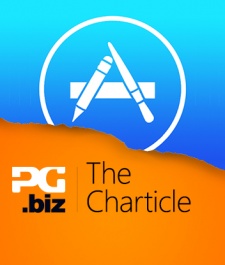 August 15th, 2013 - 06:09pm
By Jon Jordan, Contributing Editor
It's easy to think about the algorithms which rank apps on the App Store as sitting in a literal big black box somewhere in a Cupertino basement.

And like that 'other box' which contains Schrödinger's cat, the state of these algorithms is much debated.

However, it's pretty clear something was tweaked around the 7 August 2013.

Several sources have told PocketGamer.biz they saw the position of their F2P games moving significantly, some upwards and some downwards.

This is also born out by the evidence of the charts themselves (see graphs below).

The consensus is that Apple is now paying more attention to refunds; something Google has already taken into account with its Google Play ranking.

(In general, Google is thought to have a more sophisticated approach to its chart rankings, including taking into account user retention and whether or not apps are uninstalled.)

"We're not seen a fall in revenue, but because you're going to get more refunds from free-to-play games, this change benefits [the chart position of] paid games and non-game applications," one anonymous developer told us.

It's pretty clear that the top paid game in the US top grossing charts - Minecraft got a big boost between 7-8 August.

Non-gaming F2P apps Rdio and Grindr also saw their chart positions change significantly between 7-8 August, and both have continued on higher upwards paths since.

Sockin' it to F2P games

Looking at F2P games, the trend isn't totally transparent for the top top grossing games such as Clash of Clans, presumably because the level of refunds doesn't impact their massive sales.

Looking further down the charts though, Social Quantum's Megapolis was battered down 25 places between 9-10 August, but quickly recovered, before trailing away.

Meanwhile Kabam's Kingdoms of Camelot lost 6 places between 5-6 August, then jumped back up between 6-7 August, finally dropping down around 10 places from 7-9 August.

It wasn't all bad, however. GREE/Funzio's Modern War jumped a massive 20 places for three days, only to collapse. It's now outside the top 30.

But one of the best performers has been Backflip/Hasbro's DragonVale which built on a small jump between 8-9 August to drive up 30 places in the following week.

Of course, the longer term variations seen likely due to the reaction of developers and publishers, who seeing their games' top grossing position changing, are spending more marketing money to recover the situation.

Reply
Stefan Knorr
In-App purchases were down for more than 6 hours on August 7, so it certainly had an impact. A lot of movements are probably more related to release of new items or updates in the free-to-play games though.
Posted 8 years, 9 months ago Reply
Oliver Miao CEO at Pixelberry Studios
I'm with Jon and his sources on this one. It's not an IAP glitch.
Posted 8 years, 9 months ago

But there's certainly been some interesting changes Reply
Joe Wagner
Jon, are you sure there was a tweak? Apple had serious issues processing IAP last week, but it doesn't appear to have affected paid apps or subscriptions. That would explain some (but not all) of the movement you've highlighted here.
Posted 8 years, 9 months ago