The Charticle: Why the next Infinity Blade needs to go F2P 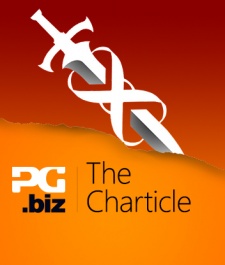 Chair Entertainment's Infinity Bladefranchise has been one of the most significant on iOS.

It debuted in December 2010, and was immediately cited as one of the console-quality titles which highlighted the value of Apple's iPad (itself launched only eight months earlier) as a gaming device.

Despite being a paid game at $5.99, Infinity Blade was also important as one of the first games to demonstrate how in-app purchases could be integrated into a hardcore game.

IAP were introduced shortly after launch as an update.

The second game was released a year later, and followed much the same trail in terms of gameplay and the highest quality graphics.

And it remained a paid game. Indeed, despite the price deflation that happening in the App Store, the price was increased to $6.99. Once again, it included a strong IAP economy.

Both games were also very successful, both critically and commercially.

Looking at their performance through the lens of our Success ranking, Infinity Blade I scored 0.96 (out of a possible 1.0) on iPhone and 0.98 on iPad. Both versions peaked at number 1 in their respective platforms on the US top grossing charts.

Infinity Blade II ranks as being even more successful.

When we look at Infinity Blade III, however, the picture is very different.

Released on 18 September 2013, it's a $6.99 paid app. The graphics continued to be cutting-edge, and gameplay and story were appropriately enhanced, and the IAP economy was very sophisticated - as we considered in our Monetizer column.

Yet despite being a paid game, the industry had moved on so much in the preceding two years that Infinity Blade III only peaked at #4 on the US iPhone top grossing chart and #6 for iPad.

Using our Success ranking, the iPhone version scores 0.23 and the iPad version 0.12.

These remain above the 0.1 level we use as a benchmark for commercial success, but the comparison with the previous two games is clear to see.

Of course, our Success ranking says nothing about which of the three generated the most amount of revenue or profit. It merely looks to rank games in terms of their commercial success against their peers, with a particular focus on the US market.

For example, Distimo estimates that Infinity Blade III was the #4 paid app globally during September, with its key markets being the US, China, the UK, Russia and Germany.

Yet, with all the top top grossing games being free-to-play, the paid nature of Infinity Blade is now an obvious barrier-to-entry for many potential players.

As a paid game, Infinity Blade III started high on the US iPad App Store but has been slipping down since - falling out of the top 100 within a month, although a recent uplift has been provided by an update

Distimo estimates that around 68 percent of the game's revenue in the US has been generated by its upfront price, with around 32 percent from IAPs.

The challenge for Chair when it comes to the next iteration of the game is whether the IAP revenue it will be able to generate from greatly expanding the game's reach by going free-to-play will be more than the net $4.89 it currently receives from each paid purchase.

Both the overall market dynamic and our numbers suggest the answer is a massive yes.