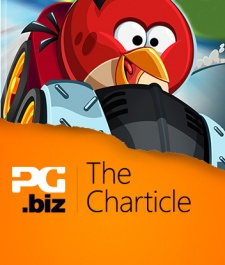 Obviously, given Rovio's marketing muscle in the mobile market, the F2P title has been downloaded multiple millions of times.

What's much more interesting, however, is how the game has fared in terms of the top grossing charts.

As with its downloads, Angry Birds Go! has performed better on iPad than iPhone.

Angry Birds Go! performance on the US top grossing iPhone chart hasn't been as good as on iPad - via App Annie

On Google Play - a chart which typically takes more time to rise up than on iOS - Angry Birds Go!'s highest top grossing position in the US has been #45. It's not yet been the #1 top grossing app in any countries.

Focusing on the game's global spread, it's performed well in Russia (the #5 top grossing iPad app), and South Korea (#8)

Angry Birds Go! has been a hit in Russia - here we see the iPad top grossing chart, via App Annie

Looking deeper in Asia, the iPad version of the game also peaked at #29 in the Chinese top grossing chart and #35 in the Japanese chart.

Of course, Google Play is more important in Korea and Japan. The Android version of the game has peaked at #24 top grossing in Russia, #30 in South Korea but only #196 in Japan.

Angry Birds Go!'s top grossing performance on Google Play in Korea has been significantly better than in Japan - via App Annie

Yet as most of the graphs show, the key concern for Rovio will be that while Angry Birds Go! has launched very well in terms of its first three weeks, it's now tracking downwards in terms of top grossing chart position, particularly on the more volatile App Store.

Nordics and Japanese spend the most on development, while Chinese spend most on promotion