The Charticle: Just how powerful is an Apple Game of the Year award? 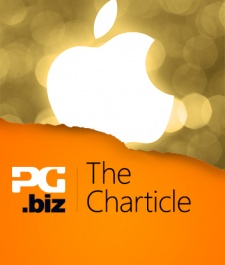 One of the surprises of 2013 were Apple's featured Games of the Year.

Although the vast majority of revenue on the App Store is generated by free-to-play games, Apple's editorial team underlined their experience as game industry veterans from the retail era, chosing instead to highlight paid games, none of which included IAPs.

The situation does provide an opportunity to see how an Apple GotY award affects sales, however - hence this Charticle.

Unlike successful free-to-play games, which launch high on the free download charts, slowly dropping away as they convert players into payers - and hence building up their top grossing chart position weeks after launch and staying there - paid game launch hard and then fall away.

This can clearly been seen in the case of Vlambeer's $2.99 Ridiculous Fishing.

Taking a selection of countries such as the US and EU5, it launched strongly into the top 100 top grossing charts but had dropped out of the top 500 by the end of May 2013.

A update in July caused another strong peak into the top 200, followed by a weaker rise in August but until the game got its Game of the Year award in December, Ridiculous Fishing wasn't selling well.

Looking at the GotY spike, it's broadly similar to the update rise in July, but doesn't propel the game into the top grossing top 100 in any countries. From that point of view, then, the GotY award wasn't a breakout moment for Ridiculous Fishing.

The game launches into the top 100 top grossing in some countries and then falls away during November. There's a small peak at the start of December - likely thanks to the game's very strong critical acclaim - and then the Apple feature kicks in.

The final game we're looking at is Frogmind's $3.99 Badland.

Differently from the previous two games, it managed to remain in the top 500 top grossing in key countries since its April launch, thanks to updates, although there is the characteristic paid game decline over time.

Again, the Apple GotY award in mid-December gives Badland a boost up the top grossing charts, but in this case it's not as pronounced, particularly in contrast to Ridiculous Fishing.

So what conclusions can we draw?

Clearly getting a Game of the Year award and App Store featuring does have an impact. Yet, even in the case of paid games - where you'd expect a strong effect - it is comparable to a successful update rather than giving a game a 2 or 3-fold increase in sales.

In the case of these three games, however, this could be because their strong indie game characteristics are not likely to immediately appeal to a more casually-inspired audience.