Charticle Special: What Flappy Bird's success tells us about social openness and geopolitics

Looking at the outliers of this week's viral phenomenon 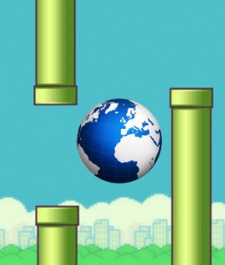 While it's generating plenty of controversy, in this Charticle Special we're going to sidestep this and delve into what Flappy Bird can tell us about geopolitics.

As we now all know, the game was originally released in May 2013, and recently has become a global phenomenon for developer Dong Nguyen.

Looking at the broad facts, the game - which is free, without IAP and only monetised by Google Ads - has been the #1 downloaded free app in 107 countries on the App Store for iPhone (via App Annie), and 100 countries for iPad.

However, it's been ranked in the top 1000 in 155 countries, so as an interesting experiment, let's take a look at the countries in which it hasn't been a success.

Troubled West African state Guinea-Bissau (currently under military control) is the worst ranking country for Flappy Bird on iPhone, where it's only been the #683 most downloaded app.

This is surprising given that there aren't many iPhones in the country, so you'd think it would be relatively easy for the game to go to #1.

Of course, the reason is that while Flappy Bird is a global viral phenomenon, driven by Facebook and Twitter updates about (low) high scores, Guinea-Bissau isn't a place where social networks have much power.

Indeed, more generally, looking at the places where Flappy Bird hasn't been a top 10 most downloaded game gives us a list of politically and socially disadvantaged countries.

These are all either unstable/military-led Africa states or dictator-led ex-Soviet territories in Central Asia in which social networks aren't popular/available and hence viral phenonemon can not spread quickly.

These aren't the only countries to consider, though.

Interestingly, Flappy Bird is currently only ranked #123 in China (although rising), perhaps a combination of its unique geopolitical and cultural situation and the ongoing Chinese New Year period.

(This is also reflected on Google Play, where the game isn't ranked in Taiwan, ranks #465 in Japan, and #296 in South Korea).

And continuing the Soviet theme, ex-communist countries don't see to like the game as much as the rest of the world either, with Flappy Bird ranking #12 in Russia and #10 in Ukraine and Belarus.