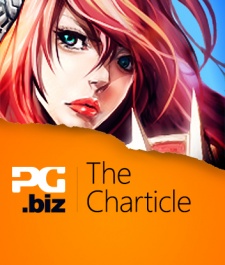 Aeria Games made headlines recently with the news it was splitting its US and European operations.

The main US-headquartered part of the company will now be focused entirely on mobile F2P games, while its European operations have been bought by German media giant ProSiebenSat.1.

It will run all of Aeria's currently live PC and mobile games, with both companies rebranding to demonstrate they are now separate entities.

Why this is interesting in the context of a Charticle Special is that Aeria has built its reputation in F2P games in terms of its local approach to operations.

For example, its key mobile title Immortalis is available in four standalone versions; a global release, and specific versions in the French, German and Russian languages.

Each of these releases is completely separate, most notably in terms of its operations - i.e. day-to-day events, marketing and retailing etc.

"We've seen explosive growth with our approach, seeing Immortalis rise to the top of the App Stores in the US, Germany and France," says Aeria Europe's CEO Pascal Zuta, who will become one of two co-CEOs of whatever Aeria Europe is called in future.

"We will stay true to our strategy of great, proven games with high quality localization," he adds.

And this provides us with an excellent Charticle opportunity.

This highlights it's a game that generates a high revenue per player; something that can clearly be seen if we compare its top 500 performance in terms of the download and top grossing charts for the US, Canada and the UK.

The download iPhone chart position of Immortalis (top 500) and its top grossing iPhone position (top 500) for the US, UK and Canada - via App Annie

The situation is further concentrated when we look at the performance of the French language version Immortalis - Jeu de Cartes.

It's been a top 10 most downloaded game in three countries (Senegal, Algeria and France) and been a top 10 top grossing game in four (Senegal, France, Luxembourg and Belgium.)

And in terms of its performance in France, while it was initially a top 100 game in terms of downloads, it struggled to maintain position in the top 500.

Yet it's been solidly in the top 50 top grossing chart on the French App Store for iPhone since its release; often in the top 10.

When it comes to the German version - Immortalis - Sammelkartenspiel RPG - the situation is broadly the same.

It's been top 10 most downloaded app in no countries but top 10 top grossing in three - Austria, Germany and Switzerland - and has remained in the German top grossing top 20 for the vast majority of its lifetime.

As for the Russian version of Immortalis, this was only released on 31 October 2013.

It's been a top 100 app in terms of downloads in Russia and Belarus, but only a top 100 top grossing app in Russia. Still, as you can see from the charts, its top grossing performance is much better than you would expect from its download performance.

Whether more publishers will look to take this local approach remains hard to judge, though. For one thing it's more expensive in terms of operational costs and it reduces the overall virality of your audience into silo-ed language groups.

In addition, the commercial success that can be generated in lucrative and well developed language markets such as French and German (and perhaps Spanish and Portuguese) seems less obvious when applied to Arabic and Bengali, despite their larger reach.