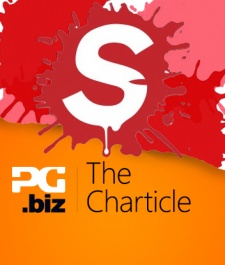 Remember Surgeon Simulator?The preposterously hard, but always hilarious, PC title that puts you in the shoes of a surgeon with a worrying lack of dexterity?

Well, Bossa Studio's recently brought the previously PC-only release the App Store - thanks to its foundations in Unity - where it's currently available for the princely sum of $5.99/£3.99.

On first glance, it could easily be described as the ultimate 'safe purchase'. It's a game that's reasonably priced, critically adored and, thanks to its year long run on PC and roots in the indie scene, already boasts a loyal fan base.

But has that been enough to help it to compete on an App Store that's increasingly dominated by F2P giants?

In the US, Surgeon Simulator has been well received.

On the US iPad downloads chart, Bossa Studio's release has been a permanent fixture in the top 10 since it launched on March 13.

However, while the game's performance has undoubtedly been impressive, Surgeon Simulator has been unable been unable to rise to the chart's summit, instead peaking at #2.

Of course, downloads alone don't pay the bills, which is why a strong showing on the grossing charts is always a welcome prospect.

On the US top grossing chart for iPad the game wasted no time in entering the top 100, where it managed to break into the top 50 before very recently falling down the pecking order.

In Europe, the game's performance has been distinctly erratic.

On the EU5 iPad downloads chart - which looks at France, Germany, Italy, Spain, and the UK - the game has had its fair share of ups and downs, breaking into the top 100 in all 5 countries, but dropping out at times in both Spain and Italy.

Still, those appeared to be minor setbacks at worst, as the game recently claimed a place in the top 50 in all 5 countries, performing extremely well in the UK and France where it has been riding high in the top 20 and top 10, peaking at #2 in both regions.

The topsy turvy nature of the downloads chart means that Surgeon Simulator's performance on the EU5 top grossing chart for iPad has been equally mixed.

In the UK and France, the game managed to break into the top 50, peaking at #12 and #28 respectively.

In France though, the game couldn't maintain it's place in the upper echelons, a fact that adds an extra layer of importance to Surgeon Simulator's consistently positive performance in the UK.