How did the $9.99 Faster Than Light compete in the top grossing charts?

A measure of LTV 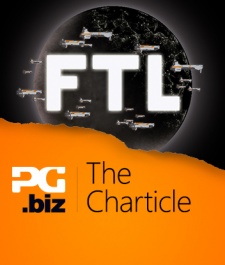 What happens when you take a critically acclaimed, universally adored PC game, and release it on the App Store?

The fact that FTL is already a relatively well known title means that its voyage onto the App Store should be a smooth one, but in order to achieve longterm success it will need to out-generate the fleet of F2P titles currently occupying Apple's marketplace.

In terms of its performance on the US paid iPad chart, FTL's has done well.

Since launching on 3 April, it's found life inside of the top 10 relatively comfortable, and while the game couldn't hold onto the #1 spot it snagged upon launch, it's still yet to fall outside of the top 5.

FTL's performance on the US top grossing chart for iPad, demonstrates the power of micro-transactions over a single upfront payment.

After peaking at #11 upon release, FTL began slipping down the charts, and it hasn't stopped since. It isn't in freefall just yet, but unless the game pulls off a dramatic u-turn a place inside of the coveted top 10, and perhaps even the top 50, appears to be out of reach.

Of course, this is pure maths. Because it doesn't have any IAP, the lifetime value of a FTL player is capped at the initial $9.99 price point. But, at the top of the top grossing chart, it's competing with games which are both more popular and with many players having LTVs of more than $10.

It's a similar story in Europe, where FTL's impressive performance in terms of the paid download chart hasn't translated into success on the grossing charts.

Still, on the EU5 iPad downloads chart - which looks at France, Germany, Italy, Spain, and the UK - FTLhas undeniably been successful.

In France, Germany, and the UK, the game has spent a lot of time inside of the top 10, which will go someway towards making up for a lacklustre showing in Italy, where it dropped off the radar almost immediately.

As we saw in the US, it's on the grossing charts that FTL'sstory takes a disappointing turn

After a promising start on the EU5 top grossing chart for iPad, which saw the game climb into the top 10 in both the UK, and Germany, things turned sour as the game was quickly overtaken by F2P rivals.

FTL  couldn't make it into the top 50 in Italy, while it quickly fell out of favour in Spain and France.

The good news is that the game still remains in the top 50 in the UK and Germany, however, all signs suggest that its days in the money-making places are well and truly numbered.

Why DomiNations’ $100 million LTV is as good as it gets

FTW: The making of Faster Than Light