Did Monument Valley rise or fall in the global App Store charts? 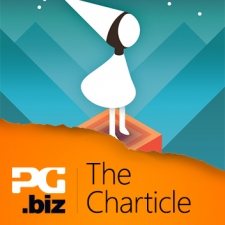 If hasn't been long since the unequivocally beautiful and utterly mind-bending puzzler, Monument Valley, made its way onto the App Store.

Its arrival was greeted with fanfare from consumers and critics alike, however, despite being a testament to creativity, the game, which is priced at $3.99, will undoubtedly struggle for longevity in grossing charts ruled by F2P kings - or perhaps tyrants?

Love them or hate them, the F2P games are in control, which means that in order to make big bucks Monument Valley must use its launch momentum to reach the summit of the charts very quickly.

It's a small and invaluable window of opportunity. Can Monument Valley seize it?

A monument for the ages?

In the US, Monument Valley's performance was respectable, if decidedly unspectacular.

On the US top grossing chart for iPhone, the game made a decent start, entering the charts at #30, before climbing to #15 in the following days.

The game failed to reach the top 10, however, and its spell inside the top 50 was cut short just 8 days after its debut.

Contrary to what you might expect, Monument Valley actually performed worse on iPad in the US.

Despite the fact that Monument Valley is a game bursting with intricacies that can only be appreciated on the iPad's larger screen, most US gamers chose to purchase it for their iPhone.

On the US top grossing chart for iPad, Monument Valley only entered the chart at #32 before clawing its way to a peak position of #24.

Once again, the game fell out of the top 50 shortly after.

I think it's fair to say things could have gone better for Monument Valley in the states, but developer ustwo can take some solace in the fact that said US performance is only one chapter in a global story.

While an improvement on its performance in the US, Monument Valley's European showing is still slightly underwhelming.

On the European top grossing chart for iPhone - which looks at France, Germany, Italy, Spain, and the UK - Monument Valley broke into the top 50 in all five countries.

In Europe, the game's performance on iPad falls in line with expectations, with the iPad version just pipping its iPhone counterpart.

On the European top grossing chart for iPad, Monument Valley managed to reach the top 10. That milestone was achieved in Germany where the game peaked at #8, while also managing to stay in the top 50 for just over 2 weeks.

Understandably, Monument Valley's attempts to climb the Asian grossing charts - which look at China, Japan, and South Korea - have been valiant, but at times, unrewarding.

On the Asian top grossing chart for iPhone, in particular, Monument Valley has found it difficult to make an impression.

The game did manage to climb into the top 50 in South Korea, where it peaked at #33. However, in China and Japan it was nowhere to be seen.

Mirroring the situation in Europe, Monument Valley's iPad performance in Asia outshines its display on the iPhone.

On the Asian top grossing chart for iPad, the game has made its way into the top 20 in South Korea, peaking at #18, while it also broke into the top 50 in China, where it peaked at #36.

Overall, it's hard not to be a little disappointed with Monument Valley's global performance.

It's surprising to see a critically adored game that has been featured by Apple in 591 places on iPhone and iPad combined struggling to make it into the top 10, and even the top 20 in some regions.

Monument Valley is a truly phenomenal game, and even though it put on decent performances on both iPad and iPhone, it still hasn't achieved chart-topping greatness.

Unfortunately for the developer, the simple fact that Monument Valley doesn't contain any IAP - so its LTV is limited to the initial $3.99 price - means that the top grossing charts are one puzzle that it will never solve.

With a conversion rate of 10%, ustwo's Monument Valley IAP has paid off

Unfortunately for the developer, the simple fact that Monument Valley doesn't contain any IAP - so its LTV is limited to the initial $3.99 price - means that the top grossing charts are one puzzle that it will never solve.
Posted 8 years, 2 months ago

Reply
David Costello Development Director at Pixel Blast Ltd
There is more than 1 benchmark of 'success' than top grossing, and to judge Monument Valley in the top grossing f2p dominated framework is comparing apples against oranges. Self-contained, premium game producers are generally under no illusion that their game is going to fit the long tail or be a grossing machine of the top f2p games. No1 in 44 countries is a positive success at launch and if you're going to look at charts, paid for would add some nuance.
Posted 8 years, 2 months ago