Did Family Guy's quest for cash push it to the top of the charts? 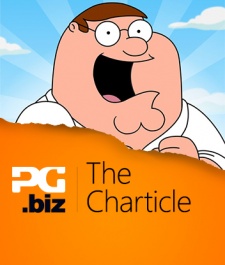 What do you get when you take a major cartoon franchise and turn it into a F2P mobile game? Well, The Simpsons: Tapped Out. And now, not-so-hot on its heels, Family Guy: The Quest for Stuff.

While Family Guy: The Quest for Stuff is likely looking to follow in the footsteps of its extremely successful Springfield-based predecessor, the fact that the game is a few years late to the party means that it's already behind in a two horse race.

Both TinyCo and the accountants over at Fox will be hoping that Family Guy's large fan base can help make up for lost time and propel their game to the top of the charts, but life on the App Store is rarely that simple.

Family Guy's showing on the US top grossing chart for iPhone hasn't been awful by any stretch of the imagination, however, I expect that TinyCo will still be disappointed with its performance.

After making its debut on April 10 the game strolled into the top 50, peaking at #14 within a week of release.

It can still be found comfortably ticking over in the top 50, though, it has yet to make a serious push for the top 10, which might be a cause for concern in the coming weeks and months.

On the iPad, Family Guy's performance has been unexpectedly timid.

Even though the game managed to break into the top 50, where it peaked at #27, it has been unable to make a serious impact.

The game is now gasping for breath at the wrong end of the chart, and unless it sees a drastic change in fortune, it looks set to sink, rather than swim.

The good news for TinyCo is that Family Guy has fared better across the North Atlantic.

On the European top grossing chart for iPhone - which takes a look at France, Germany, Spain, Italy, and the UK - the game has looked sharp, despite not gaining a foothold in certain regions.

In the UK Family Guy has built a home for itself inside of the top 10, after having shot into the big-money positions just 48 hours after launch.

However, despite its success in the UK, the game has been stranded in the top 30 and top 20 everywhere else, with its second best performance coming from Italy, where it peaked at #15.

It's a similar story on the European top grossing chart for iPad, which proves that the UK is undeniably Family Guy's home away from home.

The game once again broke into the top 10 in the UK, however, this time it couldn't defend it's positon for more than a few days.

Consistency has also been absent in other countries, with success coming in spikes, and even though the game did manage to break into the top 20 and top 30 in Spain, Germany, and Italy, those 'breakthroughs' were, in reality, nothing more than fleeting visits.

Reply
Sara Eva Escobedo Fisher
It sucks I cant play the family guy on my iphone
Posted 6 years, 11 months ago