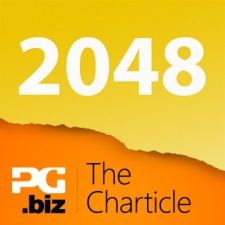 If there's no such thing as bad press, then the creators of number crunching puzzler 2048 won't mind all the attention they've been recieving lately.

As you're no doubt aware, 2048 bears more than a passing resemblance toThrees - another numerical brainteaser - and, as a result, there are plenty who feel that the game's success is both undeserved and unjust.

No one likes a clone, of course, but is 2048 really on course to usurp Threes!, or has mimicing success proved too difficult a task?

2048 is a free-to-play game that only features one in-app purchase - which removes adverts for the princely sum of £1.49 - so it's not surprising to see the game performing extremely well in the download charts.

On the US downloads chart, it has been a constant presence in the top 10 since launching back in March on both iPad and iPhone.

As you'd expect, the game has been well received on all of Apple's devices, though it has been at its very best on the iPhone, spending most of its time in the top 5, usually at #1.

2048's performance on the European downloads charts has been equally formidable.

On the EU5 downloads chart - which looks at France, Germany, Italy, Spain, and the UK - 2048 broke into the top 20 in all 5 countries on both iPhone and iPad, hitting the top spot on multiple occassions.

True to form, the game also amassed more downloads on the iPhone, once again finding a greater level of consistency on the smaller screen.

All bang, no buck

Contrary to what some might think, however, 2048's domineering performance on the download charts hasn't brought developer Ketchapp bags of cash, as the game has found it impossible to make any sort of impact on the US and European grossing charts.

2048 couldn't even break into the top 1000 in the US, while the puzzler also encountered similar difficulties in Europe where it briefly peaked at #193 in France.

Some might argue that 2048's dismal performance on the grossing charts proves that Threes hasn't suffered at the hands of its doppelganger.

Of course, things aren't that black and white, and 2048's success in the downloads chart proves that many consumers aren't willing to pay for something that they can get for free.