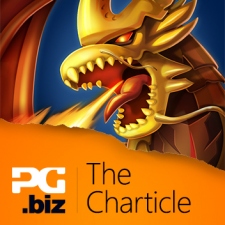 The IUGO-developed GREE-published Knights & Dragons hasn't the the sort of game to set the download charts alight.

It's not been a massive hit with the critics or hardcore players either.

Yet over the past two years, it is one of the F2P mobile games that has demonstrated that if you have a solid enough foundation, operating your game-as-a-service can bring longterm rewards.

One way of looking at this is using metrics that have been developed from our Monetizer column.

We're created a Popularity metric, which is the number of free downloads charts in which a game goes top 10 divided by the number of top 100 charts.

This fraction is then further divided by the game's peak US free download position: the US being the #2 global market by revenue as well as representative of all western markets.

(Of course, you'd use another country if you where analysing a top Japanese or Chinese game.)

In the case of Knights & Dragons, we can see that for iPhone, iPad and on Google Play, the game scores 0.001 for Popularity. That means it hasn't performed particularly well in terms of its peak downloads.

When we considered its Success metric, however, things are rather different.

The Success metric is the same as the Popularity metric, but instead of looking at free chart position, we look at a game's peak top grossing chart positions.

As a rule of thumb, a score higher than 0.01 can be considered a success, so in that context Knights & Dragons has been very successful, especially on iPhone and Google Play.

(NB: While iPhone and iPad performance can be directly compared, because the Google Play operates in a different way to the App Store, especially in terms of the top grossing chart, it's not sensible to make direct comparisons between a game's cross store Success and Popularity metrics.)

Our final metrics is the Monetisation Efficiency ratio, which is simply S/P - a measure of how well a game has converted its US download peak into top grossing peak positions.

And on this level, we can see that Knights & Dragons is very successful. Indeed, we'd treat anything over 5 as being impressive, so its iPhone and Google Play scores are as high as any game we've analysed to-date.

A knight to watch

When we look at the game's chart position, Knights & Dragons  has spent a lot of time in the top 100 on the US top grossing chart for iPad.

Its position hasn't been steady, but it has been driven by IUGO's strong update cycle which continually increases the game's revenues.

The story in Europe is strikingly similar.

On the EU5 top grossing chart for iPad - which looks at Spain, Italy, Germany, France, and the UK - the game has managed to reach greater heights, peaking at #10 in Spain, however consistency is once again notably absent.

Over on the Google Play store Knights & Dragons'  performance is the polar opposite of its App Store showing, perhaps because Google is thought to have a more coherent approach to its top grossing chart algorithms.

The game has found a solid home in the top 20 of the US top grossing chart for Google Play.

After entering the chart the game quickly powered its way into the top 50, where it has stayed for almost a year, frequently breaking into the top 10 and peaking at #4; again demonstrating cyclical behaviour from the upgrade cycle.

In Europe the game has been slightly less consistent, though it still managed to show its strong credentials.

On the EU5 top grossing chart for Google Play, Knights & Dragons  broke into the top 40 in all regions apart from Spain, where it's struggled until recently.