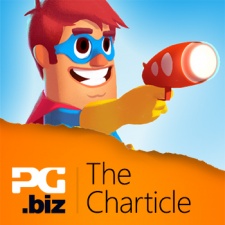 It might have taken Grand Cru a mammoth nine months to get Supernauts  from soft launch to global launch, but that time spent tweaking the game in Canada and New Zealand hasn't dulled the appetite of hungry players, with the game hitting 1 million downloads in just six days.

But where did those downloads come from?

That's the question for this week's Charticle.

Because Supernauts is a block-based user creation game (aka Minecraft  meets Habbo), it's obviously more suited to tablet play, so in this Charticle we're going to see how the game is performing on the iPad download charts.

(It's also too soon to check its top grossing performance, although we will be looking at this in future weeks.)

Certainly, in the US Supernauts  has made steady progress.

After entering at #73, the game quickly made a move on the top 50, and eventually the top 20, suffering slight dip in its first week on the charts but ultimately finishing up at a peak position of #16.

However, Europe has been something of a EU-topia for Grand Cru's social building game.

On our EU5 download chart, which looks at Germany, France, Italy, Spain, and the UK, Supernauts  hit the charts running - thanks to Apple promotion - going into the top 10 in four regions, falling just short in the UK where it entered the chart at #15.

Despite slipping down the top 50 in the UK, and eventually France, the game has held firm in Germany, Spain, and Italy, where it has carved out a position in the top 10, peaking at #5 in Germany and Italy.

Over on the key Asian markets Supernauts  has also been well-received.

The game is flying high in South Korea, where it has spent the majority of its time inside of the top 20, while in China the game has just fallen short of the top 20, but still looks solid.

Japan is undoubtedly the weaker link, though Supernauts'  performance in the region is still impressive, with the game comfortably inside the top 100.

And, as you might expect, Supernauts  has been putting in a real good shift on Grand Cru's home turf.

The game entered the Finnish download charts inside of the top 10, peaking at #8.

While the charts suggest that Supernauts  may be slowly sliding outside of the top 50, for the time being the game's position looks relatively secure, and it's also already within the top 100 top grossing games for iPad.