Kim Kardashian: Hollywood - a US hit or global breakout? 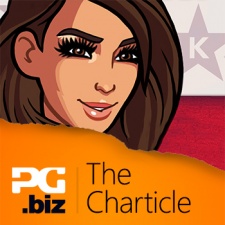 Unless, of course, your name is Kim Kardashain.

That's right, Mrs Kanye West now has more than one claim to 'fame', as Glu Mobile's licensed game, Kim Kardashian: Hollywood,  has done what others can only dream of and taken the US charts by storm.

But, just how much success has Kim K found globally, and, more importantly, will she prove to be a permanent player or a one-hit wonder?

We find out in this week's The Charticle.

Keeping up with Kim

In the US, Kim Kardashian: Hollywood  has been performing very well.

On both the iPad and iPhone top grossing charts the game has managed to break into the top 50, peaking at #22 on iPad.

The game has been more impressive on iPhone, where it looks extremely comfortable, peaking at #5.

Indeed, it's one of the few games to break into and remain within a top 10 that been dominated for months by games from the likes of King and Supercell.

In Europe, the game's performance is more mixed, perhaps demonstrating which countries are particularly influenced by US culture.

That means it's performed relatively badly in Germany and Italy but well in France, Spain, the Nordics (we're taking Sweden as an examplar) and - of course - the UK.

Indeed, the game is actually doing marginally better in the UK than even the US.

However, the iPhone grossing charts are where it really began to fly, with the game becoming a permanent fixture in the UK top 10.

Its performance in Sweden and France also saw a notable boost, with the game peaking at #10 and #33 in those regions, although it's now in decline in France.

And it's not just on the App Store that the game has been doing the business.

Despite an early lull, it seems Kim Kardashian  might just have what it takes to succeed on Google Play.

The game has recently broken into the top 50 on the US top grossing chart, where it currently sits at #19, but its trajectory will clearly take it higher.

On the European top grossing chart it's a similar story.

The title has now broken into the top 50 in France, Sweden, and the UK, slowly rising in all regions and currently resting at #34, #19, and #12 respectively.

The only weak spot - perhaps unsurprisingly - is the game's performance in the key Asian markets - China, Korea and Japan, where its best placement is a peak of #220 in the Korean download charts for iPhone.

All-in-all, it looks like Glu has a surprise hit on its hands - a game that will monetise very well in the US on all platforms, and also pick up considerable business in key European markets such as the UK and the Nordics.

Like the girl herself, then, Kim Kardashian: Hollywood  has legs.

Is Glu really paying Kim Kardashian 50% of the gross revenue of KK: Hollywood?