They do move in herds 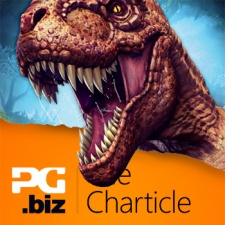 When Glu signed an agreement to release a brand new IP featuring the voice and likeness of Kim Kardashian, many could only raise an eyebrow in confusion.

After all, it hardly seemed likely that hollywood princess Kim would be the person best suited to grant the firm, which had been struggling in full view of the rest of the industry, a new lease of life.

That move, however, turned out to be one of the biggest mobile masterstrokes of 2014.

Kim Kardashian: Hollywood - the most unlikely of saviours - has arguably managed to pull Glu away from the brink.

The game has already added $340 million to Glu's value, and, with experts predicting that it will go on to generate over $225 million throughout this financial year, it seems that, right now, the only way is up.

Of course, it's always great to have a back up plan, which is why this week's Charticle is taking a closer look at Dino Hunter: Deadly Shores - another one of the firm's recent releases.

On the US top grossing charts for iPhone and iPad, Dino Hunter has been putting in solid performances.

Overall, Dino Hunter seems to be garnering more attention on Apple's small screen device, and though it very nearly fell out of the top 100 on iPad, a change in fortunes means it isn't down and out just yet.

On the EU5 top grossing charts for iPhone and iPad - which look at chart positions in Spain, France, Germany, Italy, and the UK - Dino Hunter has lacked direction.

The shooter's display on iPhone has been a little erratic, and consistency has been notably absent in regions such as Spain and Italy, where it has struggled to hold on to a spot inside the top 100.

However, positive performances in the UK and France, where the title peaked at #25 and #29 respectively, will give Glu cause for optimism.

Dino Hunter's erratic nature has carried over to the iPad charts, where, once again, it failed to nail down a secure position.

Despite that flaw, the game has been spending the majority of its life in the top 100, peaking at #28 in France.

If there's one thing that Dino Hunter has proved, it's that hunting prehistoric creatures is undoubtedly a western pastime.

The game failed to take flight on the Asian top grossing charts for iPhone, where it failed to make any sort of lasting impact.

Fortunately, Dino Hunter managed to turn things around ever so slightly on the iPad grossing charts, where it climbed into the top 50, peaking at #40 and #87 in China and Japan.