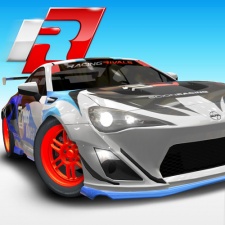 After receiving over 7 million downloads on iOS, Racing Rivals proved it still had plenty of fuel in the tank when it launched on Android, with the real-time multiplayer drag racer - which includes a highly competitive pink slip PVP mode - recently speeding past the 12 million mark.

While downloads have been trickling in from all over the globe, Racing Rivals has found a huge following in the US.

That's why, in this week's Charticle, we're taking a look at the title's US top grossing performance to find out just how much money those US consumers have been investing in Cie's glamorous racer.

After all, Glu Mobile just splashed out a cool $100 million to buy its developer Cie Games.

Since launching on the App Store in August 2013, the game has spent its entire life on the US top grossing charts for phone inside of the top 100, peaking at #10.

Despite slipping to an all time low of #88 in December 2013, it swiftly recovered, working its way back into the top 50.

It hasn't looked back since, and Racing Rivals  has now added some much needed consistency to its performance that should keep it hovering around the top 20 for the foreseeable future.

On the US top grossing chart for iPad, the game has only ever broken into the top 100 on 4 occasions, and a peak position of #64 immediately after launch was the best it could muster.

The racer did manage to drag itself back into the top 100 in March and July 2014, though it didn't even make into the top 80 before plummeting straight back out.

Luckily for Cie, Racing Rivals'  showing on the US top grossing chart for Google Play is easily the best of the bunch.

After launching in May 2014 the game took a while to warm up before eventually rocketing into the top 100 in June.

Since then it has become the definition of solid, cementing a place inside of the top 20, peaking at #10.