Swing and a hit 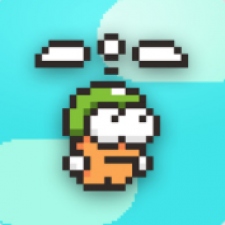 Dong Nguyen's  Flappy Bird  arrived on the scene with all of the force, finnesse, and longevity, of a hurricane.

The game became King of the App Store overnight, and for weeks it became impossible to catch a bus, sit in a lecture, or buy a coffee without seeing someone furiously tapping away, trying to set a new high score.

Flappy Bird  was popular, but it was also damned difficult. Unfortunately, the game's challenging nature meant that some players had a bone to pick with Nguyen, who, after receiving an endless barrage of abuse, decided to pull the game from app stores.

Now that the dust has settled, and Flappy Bird  has returned to marketplaces, Nguyen is back on the scene with his latest near-impossible venture, Swing Copters.

So, will this Flappy Bird' sequel' be able to fly out of the shadow of its older brother, or will Swing Copters  ultimately prove that lighting doesn't strike twice?

There's only one way to find out. That's right, it's time for the Charticle.

In the US, Swing Copters  has been a constant presence in the top 10 of the iPhone download charts, peaking at #2 before levelling out #4.

On the US download charts for iPad the game has found a similar level of success, shooting straight to #2 before dropping down to #5.

On the European download charts for iPhone - which look at performance in Spain, France, Italy, Germany, and the UK - Swing Copters broke into the top 10 in all 5 regions, peaking #1 in France, but lagging behind in Italy, where it only stayed in the top 10 for 2 days.

Over on the European download charts for iPad the game failed to break into the top 10 in every region apart from Italy.

Swing Copters also failed to grab the #1 spot in any country on iPad, though it did manage to climb #2 in Germany. Just as it did in the US, the game looks extremely comfortable inside the European top 10.

Despite being developed in Vietnam, our Asian download charts - which look at China, Japan, and South Korea - are undoubtedly Swing Copters'  weak link.

On the iPhone charts the game could only break into the top 10 in China, where it peaked #5 before falling out after 5 days.

Things do look marginally better on the iPad download charts, where the game outdid its iPhone counterpart by breaking into the top 10 in both South Korea and China. However, this time, the game could only peak at #6.

Of course, all of these are just download charts. As was famously the case with Flappy Bird, Swing Copters  is funded by in-game advertising, with the single additional of a $0.99 IAP to remove adverts.

Nevertheless, given the relative simplicity of the game and a lack of any formal marketing, it is remarkable how the game has generated enough attention to at least get millions of people to download it.

For than aspect, at least, Dong Nguyen should be very pleased with his second lightning strike.

Reply
Chris Noeth CEO at McPeppergames
There are so many good but unnoticed games in the AppStore and when you see that an unplayable game like Swing Copters is featured (in its first version) in iTunes, then this leaves behind a sad feeling.
Posted 7 years, 8 months ago

Reply
nadav bar kama project manager at NAFNA CREATIVIDAD TECNOLOGICA SL
i liked Flappy Bird a lot. and i like Swing Copters a lot ... they are both very good mega minimal designed games. will SC have the same success? impossible. the FB phenomenon was one of those content viral anomalies that strike are culture every now and then ... "lack of any formal marketing" ... Gears don't need formal marketing they have BRAND HYPE, just enough to get featured by Apple. so thats thats, Gears can make a few more bucks before going back to making there wonderful mini games away from the double blade of instant 2.0 fame.
Posted 7 years, 8 months ago