Most popular Sonic game ever 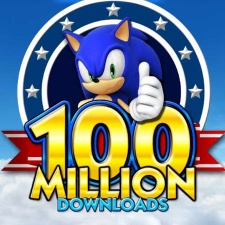 Launched on iOS in March 2013, and since available on Google Play, Amazon Appstore for Android and Windows Phone Store, Sega's endless runner Sonic Dash has racked up 100 million downloads.

It's a headline number, and as Sega points out, one that makes Sonic Dash the most played Sonic game ever.

But aside from the mindshare it's gained, can we at a look at how much revenue the Sega Hardlight-developed endless runner has been generating?

Of course, we can, and will do so in this week's Charticle.

Running down a dream

The first thing to point out is that Sonic Dash isn't a highly monetised game, at least in terms of the cost of single transactions.

None the less, in none of the countries that we've looked at does the game maintain a steady position in the top 100 grossing chart - the key to generating meaningful revenue.

Looking at the main English-speaking countries, both for iPhone and Google Play, the game's performance in Australia and the US is similar - Sonic Dash launches well and then falls away.

Its iPhone chart position is very spiky, which sharp revenue peaks driven by updates; something you'd expect from a game that has a large arcade player base and weak per user monetisation.

The situation in the UK, both for iPhone and Google Play, is broadly similar, but better than either the US or Australia.

The good news for Sega is that the UK shows a definite increase of grossing chart positions for both platforms over recent months, although the game still remains a long way from maintaining a top 100 ranking.

Sonic Dash's performance in France is similar to the UK and also show a recent uptick.

Sonic Dash hasn't done very well in Germany, however; likely due to the historic popularity of PCs in that country, rather than Sega's consoles, on which the Sonic games built their reputation.

As is clear to see, Sonic Dash has performed much worse in these countries than in the west, especially on Google Play.

Given the strong global brand that Sonic has, it's also interesting to look more widely at some emerging markets in which Sonic Dash has found an audience willing to play - and pay.

Brazil is one such, albeit with the game currently within the top 300, rather than the top 100, for Google Play. On iPhone, the game is now a top 100 grossing title.

Sonic Dash's performance in Mexico is also solid, while in Nigeria - the richest economy in Africa - Sonic Dash has regularly featured (peaked) within the top 100. albeit from a base around #300.

In conclusion, then, it's clear than Sonic Dash's success is more about downloads and player number than pure revenue.

Given Sega's relatively lack of presence in western mobile markets - Sega Networks is very strong in Asia, of course - the game will provide encouragement for the company that has recently undergo a largescale restructure to rebalance its activity.

And, as its press release, points out, the Hardlight studio - which is based in the UK - is now 50-people strong, and working on new games based on Sega IP. (It also developed Crazy Taxi: City Rush, a game that mainly monetised on in-game advertising.)