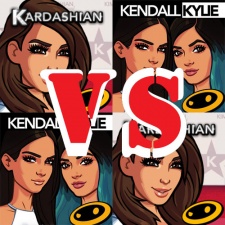 Aside from how big Kim's cut of the action is, the issue for Glu is that the mid-2014-released title is now in steady decline.

That compared to $74 million in the whole of 2015; which in a crude four-way split would be $18 million a quarter.

Indeed, looking at the game's performance in the iPhone top grossing charts in two of its key markets - the UK and US - it's now heading out of the top 100 chart, with its chart position in 2016 falling fast.

Of course, it's been wildly more successful than anyone could have imagined, but the issue for Glu is can it replace that dropping revenue with another hit, and quick?

When Kardashian-tie-in Kendall & Kylie (they're Kim's half-sisters) was released in mid February 2016, the signs looked good.

It launched straight into the top 10 in the US and UK, performing better than Kim Kardashian: Hollywood did at launch.

And during the quarter, it's generated $8.9 million from 10 million downloads across iOS and Android, so it's no flop.

However, looking at its performance across the quarter, it's clear to see that after a mere couple of months the game is already in worse position to the almost two-year-old Kim Kardashian: Hollywood - and dropping out of the iPhone top 100 grossing chart.

And the difference in grossing performance between the two games is even more pronounced on Google Play.

It's not game over for Glu, however.

It has plenty of new celebrity games in the works. Britney Spears: American Dream and Gordon Ramsay: Dash are due out soonish.

And, interestingly in the context of the Gordon Ramsay game, its base franchise Cooking Dash 2016 was Glu's #2 top grossing game in FY16 Q1.

And Glu's tie-in games with Nicki Minaj and Taylor Swift are also likely to be released in late 2016.

Yet, given the failure of its Katy Perry Pop game, it's no longer clear that games based around celebrities - even those with millions of followers on social media - are going to be the cash cow that Kim Kardashian: Hollywood has been.

Indeed, if anything, it seems more likely the first big F2P celebrity tie-in success will be the genre's high water mark.