How has the market responded to the changing genres of Plants vs. Zombies and Best Fiends?

Has the change been resisted, or welcomed with open arms? 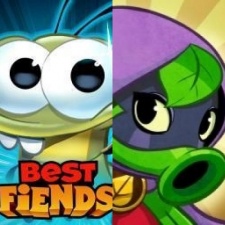 Plants vs. Zombies Heroes and Best Fiends Forever were launched within three days of one another.

Launched on October 18th and 20th respectively, each seeks to bring an established IP into uncharted territory with a new genre.

Plants vs. Zombies Heroes takes the series, dormant on mobile since 2013, from tower defence to CCG. Best Fiends Forever, meanwhile, follows up the 2014 match-3 original with an idle game.

It's early days, but how have these games performed in the fortnight since launch?

Well, as you'd expect of games with such strong IP, neither has struggled for downloads. Plants vs. Zombies Heroes launched first, and proved that there was still plenty of appetite for the series with a peak of #7 on the App Store's US download charts that lasted for three days.

However, it seems unlikely that Heroes can match the phenomenal 25 million downloads 2013's Plants vs. Zombies 2 bagged in its first month.

There's been a drop-off in downloads for Plants vs. Zombies Heroes in its second week, as is inevitable. What might be concerning, however, is the rate at which this is occuring.

Between October 29th and 31st, it has dropped from #73 to #181. But given this trajectory is to be expected, and that it remains in the top 200, there's no cause for major concern.

Best Fiends Forever, meanwhile - which has been available for two days fewer than Plants vs. Zombies Heroes - has performed similarly.

Peaking just shy of Plants vs. Zombies Heroes in the US downloads chart at #9, where it remained for two days, Best Fiends Forever has since steadily dwindled to a position of #107, as of October 31st.

This has been enough for it to secure 5 million downloads already.

An interesting sidenote is that both games prompted a noticeable spike in downloads and revenues for their predecessors.

However, the fact that people are doing so in such high numbers may be indicative of a less than positive reaction among series fans to the new entry. Or at least, that tower defence should remain a going concern.

As for Best Fiends, which is heavily cross-promoted in Best Fiends Forever, the impact was also dramatic.

The original game saw a rise of more than 100 positions in the grossing charts, from #237 to #130, in the five days following Forever's launch.

But how have the new games been performing in terms of App Store revenues?

Let's look at Plants vs. Zombies Heroes first. With a long history of success on mobile and the CCG genre traditionally monetising strongly, you'd expect it to perform well.

As for Best Fiends Forever, it's been a less impressive start. Idle games are typically tough to monetise, and Seriously always had a difficult task on its hands to replicate the success of Best Fiends.

Indeed, Forever's current peak is #176, but it was a brief one. A steady downward trajectory has taken it to #333 at last measure.

However, it is worth noting that the original Best Fiends' revenues weren't much more impressive at launch. Instead, it was sustained post-launch with creative marketing - particularly the use of influencers.

With these tricks up Seriously's sleeve, Best Fiends Forever's long-term future should be assured.