How are the games performing, and how long can it last? 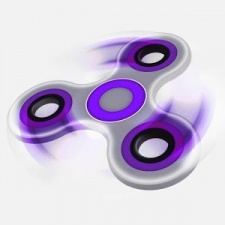 One of the many odd things about the year 2017 has been the rise of the fidget spinner.

Despite being around since the 1990s, these low-priced stress-relief aids have inexplicably become the new must-have fad, dominating playgrounds and birthing a scene of individuals using them to perform tricks for YouTube kudos.

And as history has proven time and time again, the mobile games industry is not one to pass up on opportunities of this scale.

So it's unsurprising that games featuring fidget spinners have been the UK App Store's most downloaded games two weeks running, and have also found considerable success elsewhere.

The first fidget spinner game to top the UK App Store downloads chart was Fidget Spin by Tastypill. A very simple, ad-supported affair, it's essentially a Flash-era web game spruced up with a timely theme.

Fidget Spin has yet to hit the the top spot in the US as it has in the UK, with a high point so far of sixth in the US iPhone downloads chart. It remained in the top 10 for three days, and now appears to be on a downward trajectory.

Monetising through in-game advertisements - both full-screen interstitials and banner ads - its grossing performance is therefore not recorded.

However, Tastypill will be counting on the power of the fidget spinner's popularity to drive organic installs and strong advertising revenue.

Indeed, the firm has actually doubled down on this strategy with another fidget spinner title, called Spinny Fidget.

This one launched after Fidget Spin, peaking at 21st in the US iPhone downloads chart so far.  And perhaps this is the crest of the wave for Tastypill, as it also appears to now be slipping down the ranks.

The week after Fidget Spin topped the UK App Store download charts, it was Finger Spinner.

Interestingly, unlike Fidget Spin, Spinny Fidget does feature in-app purchases. These don't seem to have generated much revenue for the company, peaking at 444th in the US iPhone Action Games grossing chart - a subset within a subset - but it seems that at least a small percentage are buying IAPs.

The week after Fidget Spin topped the UK App Store download charts, it was Finger Spinner - later renamed Fidget Spinner - from Ketchapp, which unseated it.

It wasn't surprising to see Ubisoft-owned studio Ketchapp get in on the fidget spinner action, given its history of developing and launching games quickly and in great volume - often to capitalise on emerging trends.

Fidget Spinner leapt almost immediately to the top spot in the US iPhone download charts after its launch, staying at first place from May 17th to May 26th. Even now it's only fallen as far as second.

Unlike Tastypill's efforts, Fidget Spinner focuses on translating the simple, therapeutic appeal of the fidget spinners themselves, rather than attempting to construct new mechanics around them.

But it too has made little impact on the grossing charts, emerging between May 21st and 29th around 1,400th in the US iPhone game downloads chart but otherwise not registering high enough to feature.

However, it is unfair to judge the success of games like this from Ketchapp - or any company - on these terms.

These are games developed quickly, with far fewer costs than mobile top grossers, and are designed to simply generate organic installs and ad revenue.

Their success, therefore, should be measured in downloads. And it's hard to imagine either developer in unhappy in that respect.

Another game generating downloads off the back of the craze is Fidget Hand Spinner from a developer called chenziming chenziming, whose previous output includes tie-in apps to Clash Royale, Pokemon Go and FIFA Ultimate Team.

Fidget Hand Spinner has at its peak entered the top 50 in US iPhone downloads, which is impressive for a developer likely operating with a very small UA budget.

And while all those around it appear to be on the decline, Chinese studio Words Mobile's own fidget spinner game - also called Fidget Spinner - seems to be on the up, hitting the ninth spot on the US Google Play download charts on May 29th.

So there are no shortage of these studios fighting for a slice of the fidget spinner pie.

Move with the times

But is this not short-termist thinking, a here-today-gone-tomorrow fad?

A look back on a previous trend that was popular with a young demographic and spurred mobile games to top grossing positions - the bottle flip - shows that leading fidget spinner developers Ketchapp and Tastypill have form in this area.

In fact, both studios also launched games to capitalise on the bottle-flipping trend. Tastypill launched two, Impossible Bottle Flip and Water Bottle Flip Challenge 2, and neither enjoyed the success of its fidget spinner efforts.

Water Bottle Flip Challenge 2 was the more timely of the pair, launching in September 2016. It peaked at 11th in the US iPhone download charts on October 30th, staying largely inside the top 500 until January when it dipped as low as 1,437th.

Impossible Bottle Flip launched in March 2017 to try and recapture that early success, but seems to have largely missed the boat. It peaked at 35th in the US iPhone download charts on March 20th, but was out of the rankings by April.

Neither troubled the grossing charts.

Launched in November 2016, its peak month was December when it hit 11th in the US iPhone download chart. But while it's inevitably declined since, the end of the trend hasn't meant the end of Ketchapp's game.

Of course it's no longer competing at the very top, but this shows that mobile games born out of short-term fads can transcent the short shelf-life of their source material under the right circumstances.

So while fidget spinners may not be conquering all at the top of the charts for much longer, there is still a chance that they can spin on for many months to come.

Ketchapp gets in on the fidget spinner craze with no.1 App Store game Finger Spinner