The In-App Purchase Inspector: Boom Beach storms onto the scene 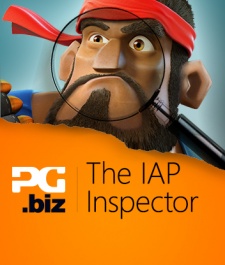 This week, we take a look at Supercell's free-to-play strategy title Boom Beach.

Boom Beach is Supercell's midcore mobile strategy title that's being hailed as the successor to its breakout hit, Clash of Clans.

The core of Boom Beach's gameplay revolves around building up a base, upgrading it, and sending your troops off to war. All familiar stuff to Clash of Clans players and certainly nothing new from Supercell at first blush.

But it's a huge mistake to view Boom Beach as a simple WWII reskin of Clash of Clans.

For starters, players are given much more control over the battles in Boom Beach.

When an attack's in progress, players can shell enemy defenses from their gunship or direct their troops' movements with a signal flare.

It's all a very satisfying strategy experience that makes you feel like you have real input into the outcome of battles - although it might be a bit too hardcore for casual players to wrap their heads around.

As one might expect from Clash Of Clans, a player can spend Diamonds to instantly complete a building or upgrade - which adds a tremendous amount of incentive to spend them quickly.

But Diamonds can also be used to purchase missing materials to upgrade bases, buildings, gunships, and anything else you have milling about your base making them invaluable if you're short on gold or lumber.

Supercell provides new players with a generous stockpile of Diamonds early on, and it's tempting to spend these quickly to speed up one's progress as they find their feet with Boom Beach.

Diamonds can also be found readily enough during this early game, hidden in the overworld map or earned as rewards for achievements, which adds to the temptation to spend them freely as seem like a plentiful resource.

But after a certain point - in my experience, around Headquarters Level 5/XP Level 10 - Diamonds become much harder to come by organically.

Unsurprisingly, this is exactly when you'll really want Diamonds to start speeding up progress around your base upgrades begin to tick over from 20 - 45 minutes to 1 - 5 hours or even longer.

Adding to the pressure to spend is the fact that Boom Beach only allows players to have a single structure or building upgrade going at a time.

This is a far cry from Clash of Clans with its multiple builders, and while some might see this as an unwelcome bottleneck to base building, it does make it easier to wrap one's head around base upgrades.

Diamonds are - by their nature - consumables and so it's up to the player and their investment in Boom Beach as to what their ultimate value is.

The rough guide to the value of these Diamonds depends on how much Boom Beach a player wants to play at a clip.

The battles are quite fun and engaging - more on that below - but base upgrades can grind to a halt once you start bringing structures up to higher levels. The Vault, for example, takes a full 2 hours and 30 minutes to upgrade from Level 3 to 4 but you can upgrade it instantly for 40 diamonds (or, roughly, 40 cents).

If you're a patient player, Diamonds will have almost no value to you.

There's no dancing around this fact: battles in Boom Beach are fun.

You search for islands to invade on the overworld map and then can scout them to get a glimpse at their defenses. If they look ripe for invasion, you can spend a small sum of gold (not, it should be noted, Diamonds) to launch an attack.

Most attacks begin with a volley of shells from your gunship to weaken defenses or clear mines, then you pick spots on the beach to deploy your troops from. Once the boots hit the sand, the otherwise tranquil beachside is lit up by the staccato sound of gunfire and the dull thud of artillery.

Being able to control and direct your troops helps make the overall battle experience feel rewarding, and there are plenty of skirmishes to play through as your upgrades countdown at your homebase.

Eventually, however, you'll conquer all the islands available to you on the overworld - both AI-controlled and player-built -  but an hour or so away from Boom Beach will see the AI reclaim their bases and give you more battles to wade into.

The in-game servers do a decent job of matching you up with player-built bases that are around your same experience level, so it'll be rare that you'll find yourself completely outclassed by a player-build base on your overworld map.

Over a week's playthrough, I invested around seven-and-a-half hours of active playtime into Boom Beach without dropping a dime and could have continued to play happily without spending up to the 10 hour window and beyond.

Ultimately, I did opt to purchase the $4.99/£2.99 pile of 500 diamonds to speed up my base progress and the effect it had on my enjoyment was negligible.

Yes, I was able to breeze through upgrades and shoot my way up the tech tree - which is required to crack some tougher bases later on as all battles are times and building armour eventually renders basic Riflemen infantry ineffectual - but I could have done the same thing with a bit of patience spread over a week or so of casual, free play time.

Boom Beach possesses a gentle sort of free-to-play balance that developers should shoot for.

You can progress easily at a lazy pace without spending a dime and enjoy everything that Boom Beach has to offer. Conversely, you can send a few dollars Supercell's way and access that same content faster.

Because of the engrossing and fun nature of Boom Beach's gameplay, however, it's likely that many serious players will be coaxed into the low-end $4.99/£2.99 in-app purchase as it opens the game up to longer play sessions and allows players to dive a bit deeper into what it has to offer.

Comparing the monetisation efficiencies of Boom Beach and Clash of Clans

How does Supercell's Brawl Stars monetise?

Taking the crown: the monetisation of Clash Royale