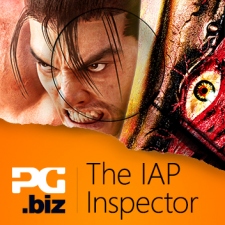 From the outset, SoulCalibur: Unbreakable Soul is a completely mixed bag.

Instead, battles are navigated by matching of different attack types to execute moves in a manner similar to Puzzle Fighter or Puzzle & Dragons. The higher the number of matches you create, the stronger your attacks will be.

But Unbreakable Soul also has a heavy card battler / CCG component to it.

In order to hold up in later fights, players must unlock, purchase, and upgrade different weapons for their heroes to use with a familiar fusion system that allows weaker weapons to buff stronger ones.

It's a lot for players to wrap their heads around, which explains the need for a 20-minute tutorial.

For all of the complications in the systems and game mechanics, Unbreakable Soul keeps its IAPs simple with a single in-game currency: Gems.

Many of these items can be earned in-game via non-premium currencies such as Weapon Medals or Avatar Spheres - but they're dolled out sparingly.

Veteran SoulCalibur fans who want to play as a favourite character / avatar may be out of luck if theirs is not among the starting three, since there's no way to directly purchase a specific character.

Instead, one must purchase packs and hope for the best.

This is, perhaps, the strongest incentive for franchise fans to spend on IAPs, but Unbreakable Soul also provides pressure through its ramped-up difficulty.

The first real boss a player encounters outside of the tutorial is something of a walking paywall that many might have issues clearing without spending on multiple weapon packs to upgrade their gear.

The value of in-app purchases in Unbreakable Soul is sharply correlated to how much of a SoulCalibur franchise fan you are.

Unbreakable Soul provides a lot of content for players to dive into, and most all of the in-app purchases are permanent (as opposed to consumable) which might make their asking price a bit easier to justify.

When looking at the packs of weapons or avatars in the shop, players are told exactly what percentages they can expect for Rare or better cards.

Spending for more expensive packs increases the chance for rares, as one might expect, while it also eliminates no-name characters from the avatar packs.

The experience of Unbreakable Soul is best summarised as SoulCalibur lite.

There's no complex system of combos for players to memorise, and positioning is handled automatically - meaning that ringouts are left almost entirely to chance.

When playing, then, all you really need to concern yourself with is watching the bar of attack cards on the bottom and setting up the most powerful combos that you can make.

This is all done with one-finger touch controls, and the effect is extremely underwhelming compared to the action-heavy gameplay for which the series is known.

Outside of the battles, SoulCalibur: Unbreakable Soul pulls players in multiple directions as it tasks them with upgrading their avatars, weapons, and purchasing consumables to help them out in longer fights.

This is a process that those who enjoy traditional, non-Hearthstone mobile CCGs will find familiar and perhaps enjoyable - but I imagine most SoulCalibur fans would find it confusing and distracting.

While almost all purchases in Unbreakable Soul are permanent, there’s a frustrating gacha element of randomness with how the weapon and avatar cards are allocated which might turn off players looking for their preferred character.

Worse, some weapons are incompatible with certain avatars unless they’ve learned the Discipline to use them.

This means that swapping a new Avatar into your lineup becomes complicated, as they might not be able to use the weapons of the Avatar they’re replacing.

If this happens, players will need to either purchase the weapon Discipline directly or spend a vast quantity of Warrior’s Memory items in the hopes that they’ll learn the Discipline randomly.

Or, alternatively, they could purchase an entirely new set of weapons for the new avatar and upgrade them.

Rather than lead players into wanting to make in-app purchases, Unbreakable Soul forces them to lay out hard currency

Once you get to this stage, the IAPs in Unbreakable Soul begin to feel unnecessarily exploitive - especially given the transparency of card percentages in the in-game shop.

Unbreakable Soul takes a very aggressive stance on its monetisation that is ultimately unfriendly to its users.

Rather than lead players into wanting to make in-app purchases, Unbreakable Soul forces them to lay out hard currency for a chance to play the game with the character and weapons that they want.

There's also an Action Point-based energy system and a fatigue element for longer fights which opens up monetisation options - but it's unlikely that many fans will play for long enough sessions for either to really be a problem.

All of this combines to make Unbreakable Soul a game that some SoulCalibur fans might find fun for short toilet-play sessions or in other situations where one-finger navigation trumps deeper gameplay, but it also holds Unbreakable Soul back from more widespread appeal.

How does The Elder Scrolls: Legends monetise?