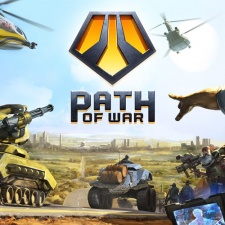 This time, we're taking a look at Path of War, a strategy title with social MMO aspirations developed by German startup Envision Entertainment and published by Nexon M.

Envision Entertainment, the developer behind Path of War, has some solid pedigree.

Formed of a core group of ex-EA Phenomic staffers, the firm responsible for - and indeed still running - the browser-based strategy MMO Command and Conquer: Tiberium Alliances, this is its first stab at the mobile platform.

In an interview with PocketGamer.biz, Envision CEO Martin Löhlein explained that it was his team's intention to innovate mobile strategy, but in a somewhat cautious manner.

Being too aggressive with its innovation has “backfired in testing,” he revealed, adding that the ingrained nature of Clash of Clans and its ilk “makes it harder to innovate."

Each battlefield is split into fixed tracks, broadly similar to Plants vs. Zombies.

Path of War, then, is not aiming to shake up the genre dramatically in the manner of The Incorruptibles. Instead, it presents a few small changes to the formula that take a little while to recognise.

The game's premise is that the USA has been plunged into a state of civil war in the aftermath of a cyber-terror attack that leaves a military force known only as The Regime in control.

Players are cast as rebels, starting out on America's west coast and gradually moving their camps across the map to take Washington D.C.

This presents the first major diversion from the mobile strategy norm, giving players the ability to drag their base around the map and to move within range of enemy settlements.

Once an attack is launched, that's when another of Path of War's subtle tweaks comes into play.

Fuel is the energy system here, required to move your base, launch attacks, and to send support troops to alliance buddies.

Each battlefield is split into fixed tracks, broadly similar to Plants vs. Zombies, meaning that you deploy your units into the lanes in which they'll be most effective. (Once deployed, they can't move left or right.)

It's not a vast departure, but it does make for a slightly different light strategy experience.

Path of War is designed to be played in short bursts - something Löhlein has expressed clearly - but from a player's perspective this all too often feels like a restriction rather than a preference.

Fuel is the energy system here, required to move your base, launch attacks, and to send support troops to alliance buddies.

While the Fuel Tank is admittedly upgradeable, having brought it up to level 5 still sees it replenishing at a relatively meagre rate of 95 units per hour.

The Fuel cost to launch attacks depends on both the strength of the base you're attacking and your distance from it, but from my experience that hourly allowance of 95 is enough for a maximum of two attacks - and that's if you're initially well-positioned.

Other times, missions will necessitate moving your base long distances across the map, taking it in stages because your Fuel is insufficient to make the move all at once.

As if this wasn't enough, if you're wanting to play consecutive battles you have to either continue with the remnants of your squad or buy Command Points to refresh the full quota.

These are bought with Steel, which is the game's soft currency and usually rather plentiful, but they still take at least one minute to produce - unless you're willing to skip the timer with a Diamond or two.

The cost of war

As for the aforementioned currencies, Steel is accumulated at a rate that seems reasonable - I've yet to run out.

Diamonds, on the other hand, are doled out as rewards at an encouraging rate during the tutorial phase, but as you progress it becomes far scarcer.

I opted for the $4.99 tier and I've used them, primarily, to buy more Fuel and skip wait timers.

Which are long, by the way. Really long. I'm only at level 6, and already it's into 3-hour plus territory - another aspect of the game that seems to discourage long play sessions.

You can buy up to 5 construction cranes, allowing you to build and expand multiple structures at once (cf The Third Builder dilemma), to slightly alleviate the issue.

I purchased a second crane for 50 Diamonds - not bad, I thought - but to unlock a third costs a whopping 500 ($4.99). Understandably, I don't know what a third and fourth costs.

On reflection, I realise that the best value option would have been the starter bundle, which offers 3,000 Diamonds, an upgrade to 3 cranes, and 12 hours of bonus storage for $9.99.

Interestingly, this seems to differ between Android and iOS versions; when starting the game on iPad, the offer was the same but with 1,500 rather than 3,000 Diamonds, and at a price of $4.99.

The reasoning behind this discrepancy is unclear - most likely it says something about differences in player behaviour when it comes to spending the two platforms.

Regardless, I haven't seen enough from Path of War to incentivise my return on either platform.

I'm only at level 6, which may seem a short amount of time in which to give up on a game, but I just don't feel as though I've been given enough.

I've spent over 600 Diamonds, many of which were bought with real money, and have hardly anything to show for it. Wait timers are long, the energy system restrictive, and there's not enough positive feedback to keep you invested.

It may well improve, but I'd wager that a number of players will never find out.