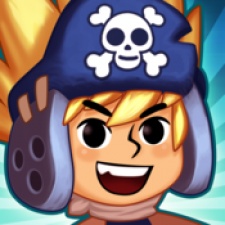 There's a great deal to like about Pirate Power.

It weaves a light-hearted yarn featuring an endearing cast of characters, looks beautiful, and has a feel that's utterly unlike any of the games this series has thus far covered.

Balancing light turn-based strategy with elements of base-building and RPG, your task is to roam the high seas, upgrading from what is essentially a rickety plank to a decked-out pirate vessel, while battling more and more nefarious baddies along the way.

Furthermore, when you learn about the circumstances under which Pirate Power was made - only two individuals collaborating for the bulk of the project, working remotely over a period of three years - it's difficult to not be impressed.

However, that can only carry a game so far.

As developers are often reminded, the general consumer rarely cares about the creative process or behind-the-scenes struggles; they care about the game and the experience of playing it.

So, how does Pirate Power's monetisation impact this?

You've got all the trappings you'd expect of a modern F2P game: incentivised video ads, an energy system, and random chests of varying quality you can buy using hard currency.

However, while the game feels very slow, to lay the blame for that at the door of its monetisation would be unfair.

I've yet to be restricted by the energy system, nor have I felt particularly under pressure to spend, but still it continues at a glacial pace. It's hardly been accelerated when I have opted to pay for IAPs, either.

The slow pace is a matter of game design, not monetisation.

In this way, Pirate Power is a really strange case. It seems that the slow pace is down more to an issue of game design, remaining determined to make the player grind whether they've spent money or not.

Perhaps it's a matter of taste - and things do open up fairly significantly at around level 7 - but the progression of Pirate Power in the early stages feels plodding to the extent that, were I not writing this article, I likely would have churned already.

It just takes too long to break out of the tutorial phase, with too much repetition of samey battles required to make progress.

You start out with 30 Flooz (approximately $1.50) which is slightly higher than the average. However, for the most part, neither currency is effective in hurrying things along.

Gold is used to buy ship upgrades and new modules, while Flooz is used as you'd expect - speeding up the production of resources and buying chests.

Chests come in a number of forms. At the lowest end end of the spectrum are those that appear for free on the map screen, offering a small number of resources - although that number can be doubled via an incentivised video ad.

Then, in the store, you have Heroes Chest and Legendary Chest guaranteeing a rare hero and a 3-star boat component respectively (79 Flooz apiece); a Resource Chest for 19 Flooz; and an Arena Chest that offers ultra-rare materials for 5 keys - earned as you rank up in PvP.

There are also two energy systems at work, with Battle Energy restricting single-player battles and Arena Tickets putting a cap on competitive play.

However, while this initially seems more restrictive, it's actually better than having a single energy.

The player can watch an incentivised ad to replenish energy rather than paying money.

With 7 single-player battles and 15 arena bouts to complete before you hit a brick wall, only the extremely committed player is ever likely to be troubled by it.

Furthermore, the player can choose to watch an incentivised ad to replenish the stocks rather than paying money.

A pirate's life for me?

In the end, then, I'm simply too impatient for Pirate Power.

But it's a design issue rather than a monetisation one.

It's the lack of a Star Wars: Galaxy of Heroes-esque autoplay mode that irks when the game has you repeating battles, not the energy system.

I did pay money (just $4.99) and have bought a couple of helpful chests with the resulting Flooz - yielding a Monki Bricolo character and some much-needed resources - but the change wasn't marked enough to make me reach for my wallet again.

There's nothing wrong with Pirate Power per se - in fact, there are many areas in which is excels - but its repetitive gameplay and slow start may put many off.

How does Badland Brawl monetise?

How does Hungry Dragon engage, retain and monetise?