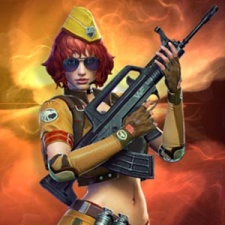 While the PC and console scene in the west remains dominated by franchises such as Call of Duty and Counter-Strike, the mobile top-grossing charts are notably lacking in successful shooters.

That's not to say that there have been no good ones, nor that anything outside top grossing is a failure. But given the size of the shooter market on other platforms, it's an intriguing anomaly to say the least.

In China, though - largely thanks to Tencent, the internet giant who bought Supercell for $8.6 billion - the situation is very different.

The entire game economy is now much more sophisticated, granular and deep.

And now, no doubt related to the fact that Tencent is a 14.6% shareholder in Glu Mobile, the US firm has been entrusted with bringing WeFire to a western audience.

One of the reasons Glu Mobile is a good fit for this project, you'd think, is because it has shooting franchises pre-established in the west - notably Contract Killer and Frontline Commando.

However, despite being originally soft-launched in the UK under the name Frontline Commando: Rivals, it was renamed Rival Fire shortly before full launch.

Now, this might not sound monetisation-related, but the decision to distance Rival Fire from the Frontline Commando series at the eleventh hour would not have been one made lightly. So why was it done?

A vague, but succinct summary would be that Rival Fire doesn't feel like a Frontline Commando game. In fact, despite Glu's culturalisation job, it still feels very much like an Asian game.

That couldn't be further from the truth here, with plenty of opportunities to earn Gems through rewards which, in a very Asian way, you have to collect manually from your inbox.

The key thrust of Frontline Commando's monetisation was in obstructing your playtime by gating levels based on the power of your weapons and gear.

It happened a lot, and it was expensive to upgrade.

You even get rewards for playing online for long sessions.

Rival Fire uses a broadly similar system, as do many F2P games, but its level-to-level upgrade requirements form a gentle curve, rather than a series of harsh spikes.

Its energy system is also far less restrictive, allowing you to play for a reasonably long period of time before needing to spend hard currency. And playing the PvP modes, a significant part of the game, comes with no energy cost attached whatsoever.

You even get rewards for playing online for long sessions, with milestones every hour between 60 and 240 minutes.

It all points to one simple, fundamental difference between Frontline Commando and Rival Fire: the former rations and controls its players' session lengths, while the latter encourages players to play for as long as possible.

However, with Rival Fire not reliant on a stop-start rhythm, these Gems are spent almost exclusively through its bustling storefront.

Here, you can buy new guns, AI squadmates, character skins, and consumables. Then there are packs of components used to level up gear, daily deals, and gacha crates.

Indeed, the entire game economy is now much more sophisticated, granular and deep.

All-in-all, it's a very Asian affair. Many of the high-ticket items are purely cosmetic, a way of showing off to other players rather than powering up.

Furthermore, there's also a VIP system encouraging players to buy Gems. The more you spend, the higher your VIP level, and thus the greater your rewards.

Amidst its Glu Mobile stablemates, particularly within the shooting genre, Rival Fire is the obvious anomaly.

Other games have attempted a similar approach, such as RAID HQ from Eight Pixels Square, but it will certainly be intriguing to see how a big studio like Glu fares with such an approach - even with a core game that's found success in China as its basis.

From a consumer's perspective, however, Rival Fire feels like a significant step forward.

It stands alone from the Frontline Commando series, and deservedly so - it's simply a far, far better experience.