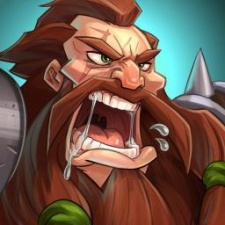 This time, we're taking a look at Rumble Entertainment's Alliance: Heroes of the Spire, an Asian-inspired squad-based RPG.

Rumble Entertainment's first mobile game was 2015's KingsRoad, a game very much built in the Western tradition of the action RPG.

Originally a browser game, it brought all the loot-gathering and inventory management of Diablo and Torchlight to touchscreens.

But for its latest release, the San Mateo, CA-based developer has looked less to Western PC games for its inspiration and more to a brand of mobile free-to-play RPG design popularised by developers in Japan, China and South Korea.

What's remarkable is the finesse with which these mechanics have been made to interlock.

This means building a squad of characters through random gacha systems, gathering resources and experience through battles - be they presided over by the player or fought automatically - and ultimately evolving heroes by fusing them with others.

Nothing new here, of course. But what's remarkable is the finesse with which these mechanics have been made to interlock, making a more than compelling case for their increasing inclusion in Western mobile games.

As is common in games with collection-gacha-fusion mechanics, Alliance wastes no time in shepherding the player towards the portal for summoning new heroes.

Giving you three free Hero Cores - one Epic Hero Core for three to five star heroes, two standard for one to three star heroes - the player is quickly introduced to the gacha mechanic around which much of the game and its monetisation revolves.

Summoning new characters in Alliance isn't the event it is in some gacha titles. There's no fancy animation here, rather instead they quickly phase into view.

This speaks to the rate at which Hero Cores are made available, meaning that this is a process that can be carried out multiple times per day.

Dispensing with the pomp and ceremony is a welcome move in this context then, making summoning several characters at once a pain-free process.

In combat, there's little to differentiate Alliance from a whole host of other mobile RPGs.

But with an option to let battles play out in an accelerated form without any player input, and a full auto-battle mode available for any already-completed area, most meaningful decisions happen off the battlefield.

The game itself puts it best: “Auto-Battling lets your heroes do the work while you do the planning”.

Setting up your team is the real focus, then, and this is where the gacha system comes back into play.

Epic Hero Cores can be used with 5,000 Gold to summon a three to five star hero.

With regular Hero Cores, a common reward for completing battles, you can summon a one to three star hero for a paltry 100 Gold.

Epic Hero Cores are far rarer, occasional rewards for completing major quests, and can be used in conjunction with 5,000 Gold to summon a three to five star hero.

Alternatively, if the player has no Epic Hero Cores available, a three to five star hero can be summoned for 75 Gems (hard currency).

There are also Legendary Hero Cores, which can be combined with 25,000 Gold for a four to five star hero, although in more than two weeks of consistent daily play I've yet to see one of these - it appears they are the preserve of high-spenders.

The next key part of the process is fusion. Each character can have up to six others fused into them - thus destroying the fused heroes - which levels them up.

When they reach the level cap for their star rating - 10 for one star, 20 for two stars, etc. - they can be evolved using (and destroying) other characters of the same level.

This process costs Gold, costs rising as you deal with higher level characters, but the soft currency tends to be in plentiful supply.

More importantly, it means that continually strengthening heroes relies on the sacrifice of others, which creates a loop of returning to summon new ones and begin the whole process afresh.

The power of wealth

Gold and Gems are the main two currencies in Alliance.

The former is used for summoning heroes, hero fusion and equipment upgrades, while the primary functions of the latter are Gem Summons, skipping timers or reviving characters in battle.

The most tempting offers come in the form of bundles.

Gold is dished out liberally in the form of quest rewards and in the hands-off Explore mode, which has the player send a batch of heroes out for several-hours-long expeditions to collect resources and gather experience.

However, the most tempting offers come in the form of bundles, and this is really the thrust of Alliance's monetisation.

The game introduces the player to bundles early, opting to present its free resources to get the player started - 10 Gems, 20 Energy, three Hero Cores and 10,000 Gold - as a 'FREE Starter Bundle'.

This sits in a menu next to Starter Pack #1 and Starter Pack #2, both of which can only be claimed once. As the name suggests, these bundles are there to encourage early spending.

Apart from offering excellent value, perhaps the most interesting thing about this bundle is the offer of 25 Gems every day for 15 days.

Known as annuities, Scientific Revenue CEO William Grosso says that this process of essentially selling a daily login reward “appeals to a very different psychological group than the impulse purchases or the gotta-have-its.”

It certainly works for me, and this series has shown that I'm far more likely to invest in games that offer annuities.

Alliance also relies heavily on the idea of scarcity in its retailing. Both Starter Packs are only available once, and there are a number of take-it-or-leave-it splash screen offers that implore “Don't Miss Out!” when you try to close them.

Furthermore, there are also a number of packages - Tiny, Small, Medium and Large, ranging from $9.99 to $99.99 and offering Gems, Gold and Hero Cores in different quantities that are each only available once per month.

This does give them an air of exclusivity, but I've yet to be tempted by any of these. One of the reasons for this is that many of the offers I'm being shown - quite regularly, I might add - are for $99.99 bundles, way out of my price range

It is as though, emboldened by the fact I spent money, the game now feels I can be tempted into spending large sums in-game.

It's a minor point, but more of a nuanced ramp-up would be appreciated in this regard - I can't claim to know the stats, but I doubt many players are leaping straight from $4.99 IAPs to bundles worth $99.99.

Play (and pay) your way

All in all, Alliance's greatest strength is in giving its players options.

Alliance's greatest strength is in giving its players options.

You can buy Gems or Gold in the normal way if you like, or you can sample a little of everything with a bundle. You can get your currency now, or get it in instalments over the next few days.

You can buy limited-time offers tied into the ongoing in-game festivals, or you can circumvent Gems and plough your money straight into buying equipment packs to deck out your heroes.

All of the above will contribute to your VIP level, which gives boosts to auto-battle speed and XP earnings, along with many other long-term benefits depending on your level of spend.

Most importantly, however, players are given the option to play the game, get new characters, level them up and be competitive in PvP without deciding to spend.

It's a longer road, but the one I think I'll be taking for the foreseeable future.

Gifts galore: the monetisation of Tales of LINK