How does Nonstop Chuck Norris monetise? 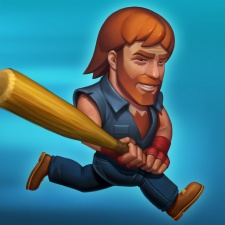 The launch of Nonstop Knight was a big moment for Flaregames back in 2016.

With the idle RPG enjoying the best launch in the German publisher's history, the firm quickly snapped up its developer Kopla Games.

Interestingly, a third company is now involved on the project, with Tag Games handling live operations on the title.

For anyone who played Nonstop Knight, the essence of the experience remains unchanged.

And so, having established it's a strong formula, Flaregames has now released a follow-up starring action hero and star of a million memes, Chuck Norris.

For anyone who played Nonstop Knight, the essence of the experience remains unchanged: your character runs through stages and attacks baddies independently, racking up coins that can be used to upgrade weapons, hats and outfits.

But of course, Chuck Norris has no need for armour.

It's always interesting to see how developers seek to monetise idle games, especially when so many of them revolve around generating ludicrous amounts of currency.

Like Nonstop Knight before it, and Best Fiends Forever from Seriously, Nonstop Chuck Norris is built around this same fundamental dynamic. So with limiting currency not an option, where's the incentive to spend?

The truth is, for a regular player, there isn't much of one. This is of course great for consumers, who can enjoy the experience uninhibited without spending a penny, but a challenge that developers in the genre will continue to face.

With Nonstop Chuck Norris, Flaregames' approach to this is a smart implementation of incentivised video ads.

With offers of ads popping up on the left-hand side of the screen every so often, they avoid being a nuisance as in many other titles by offering valuable, varied rewards - from medkits and outfits to hefty supplies of Gold.

Breaking it down, there are three currencies in Nonstop Chuck Norris: Gold, Gems and Tokens.

Gold is the main soft currency, readily exploding out of goons' faces as you whack them silly. Gems is the hard currency, meanwhile, ranging from $1.99 for 100 to $99.99 for 6,900. Modest amounts can also be earned for free by fulfilling in-game Achievements.

20 Gems (approximately $0.40) gets you a Boss Ticket to skip to the next major brawl, but the main purpose of the currency is to unlock new pet companions in Megaboxes. One costs 200, with bundles of 10 and 20 available at discounted rates of 1,600 and 3,400 Gems respectively.

As for Tokens, this currency cannot be purchased and is only unlocked when you open the rift and ascend to a new stage.

So outside of Gems and Megaboxes, the only way to spend money is through special offers, priced in real money.

The Honey Badger Bundle plays on another internet phenomenon.

The first of these, effectively a starter pack, plays on another internet phenomenon that fans of the Chuck Norris meme will no doubt also be faimilar with: the honey badger.

The bundle gets you 275 Gems, 10 Honey Badger pet companions and 10 units of CForce Water, which enable Chuck Norris to power through stages more quickly, effectively and profitably for a short period.

All in all, then, Nonstop Chuck Norris doesn't break the mould for it the idle game genre. Despite a compelling loop, it still struggles to provide a convincing argument for the user to spend money.

But from a player's perspective, this simply means that it's a game you can play for an incredibly long time - nonstop, even - without any unwanted pressure from the developers to shell out.

Furthermore, it also establishes incentivised ads as a mutually beneficial alternative, with an implementation that feels welcome rather than forced upon the player.

Put simply, there are no barriers put betwen the player and seeing Chuck Norris make light work of ever-stronger foes with a variety of ridiculous weapons. And for a game of this kind, that's a very good thing.

How does Zombie Gunship Survival monetise?

How does Best Fiends Forever monetise?