How does Zombie Gunship Survival monetise? 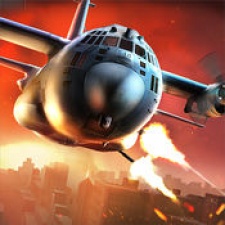 This time, we're taking a look at Limbic and Flaregames' first-person shooter Zombie Gunship Survival. First announced as Zombie Gunship, Inc. back in June 2015, it is the latest entry in a series that's lain dormant since 2014.

Survival follows the unique thermal imaging visual style of its predecessors, placing the player in an AC-130 gunship spraying bullets at the undead on the ground.

There have been a few points at which Zombie Gunship appeared to be dead.

It appeared that Zombie Gunship had been left behind by a rapidly-changing mobile market.

The first came in the years following the original Zombie Gunship in 2011, where it appeared that the premium hit was to be left behind by a modern, rapidly-changing mobile market.

A 2D, retro-style take on the series followed in 2014, but the gameplay was vastly different to that which defined the original title.

In 2015 there were signs of life, as Flaregames signed up the free-to-play Zombie Gunship, Inc. which appeared closer in style to the original game.

But then commenced a worrying period of silence until September 2016, when a late 2016 release date was announced - which it then missed.

However, almost two years on from Flaregames' signing of the title, it's now seen the light of day. It's fitting, then, that the game's subtitle changed along the way to Survival.

The Zombie Gunship formula has had to evolve, too. It's had a visual overhaul, while maintaining the thermal imaging style, giving it an utterly unique look.

The core gameplay is also pretty much intact, although the gatling guns and cannons now have a great weight and impact to them that's lacking in the vast majority of mobile shooters.

But there's now also a base-building element which will be familiar to any fans of the build-and-battle strategy genre.

The structure, after all, is essentially the same: a collection of buildings, spearheaded by the HQ, which perform either a defensive role or generate resources over time.

Metal and Supplies are the two main resources in Zombie Gunship Survival.

In turn, these resources can be used to upgrade and add to the base.

This familiar aspect is key to Zombie Gunship's free-to-play transition, but there's more going on.

Metal and Supplies are the two main resources in Zombie Gunship Survival, both generated by storage buildings at the base.

Supplies are used to upgrade buildings, while Metal is used to boost weapons for your gunship or troops on the ground.

However, the process for boosting weapons also requires the use of weapon scraps, which can be earned through item crates, but more reliably through selling of unwanted artillery.

Meanwhile, for those committed to not spending, there's also an incentivised video ad option that yields either 200 Metal or 250 Supplies (which one is offered appears to be random) in return for watching a 30-second video.

It's an unspectacular return, but well worth it if it's the difference between being able to trigger a vital upgrade or not.

Patience is a virtue

So far, this is all straight out of the F2P playbook. But adding to the mechanics made ubiquitous by Clash of Clans, is a newer one that seems well on its way to having the same industry-wide influence.

That is, of course, timed and limited rewards. Like Clash Royale does with Chests, Zombie Gunship Survival features four slots for Crates, which are rewarded for completion of missions or successfully defending your base from zombies.

Each takes time to unlock one at a time - although the inclusion of Express Crates, which only take five minutes each, eases the pain - and when all four are full, it means no rewards can be earned.

To get the ball rolling for paying players, there's also a great value starter pack for $4.99.

It's a system that's now proven, and its inclusion here fits the bill. The contents of Crates are satisfying, always including at least one weapon, and the wait timers aren't so lengthy as to be frustrating.

To get the ball rolling for paying players, there's also a solid starter pack that offers a three-star gatling gun, 500 Gold and four Elite Crates for only $4.99.

For context, 500 Gold alone costs $4.99 in the store, and four Elite crates are worth approximately $4 in real money. Add to that a strong weapon and it's an excellent bargain.

But other than this, Zombie Gunship Survival keeps things relatively simple in the monetisation department.

With the base-building and resource management of Clash of Clans and the timed reward loop of Clash Royale, the vast majority will instantly understand the systems here.

A lack of traditional energy gating and intrusive in-game ads - barring the very occasional interstitial cross-promoting other Flaregames titles - round off a polished and player-friendly package.

How does Nonstop Chuck Norris monetise?