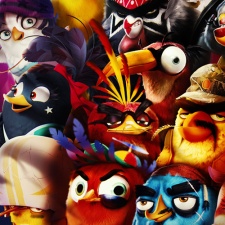 Angry Birds, in its original form, was the ultimate expression of the way in which pure and intuitive game mechanics could be brought to millions of players through the ubiquity of smartphones.

But the mobile games industry has now shifted, and demands more.

Angry Birds 2 was built around the same central mechanic that made its predecessor a smash hit, but it was actually the introduction of greater depth and RPG elements that reversed the game's fortunes and saw its grossing performance surge.

Noting this, and the trend towards greater depth in Asia's top grossing mobile games, Rovio has set out with Angry Birds Evolution to combine a strong RPG metagame with gameplay that's still perceptibly Angry Birds, but with a twist.

Still essentially about flinging birds at pigs, this time the focus is on building a squad of three birds and using their unique abilities to take down an opposing army of pigs in gameplay that's not dissimilar to Monster Strike.

The biggest impact this has in regards to metagame and monetisation is that Angry Birds Evolution features a gacha system, with birds ranked at one to five stars based on their power and given as random rewards.

For those who prefer their rewards distributed over time (known as annuities), an Eagle Card offers 70 Gems per day for a period of 30 days, at a price of $8.99.

That adds up to a total of 2,100 Gems, which would under normal rates cost approximately $36.

A Premium Egg, containing a single two to five-star bird, costs 150 Gems to purchase. A job lot of 10 can also be bought for 1,350 Gems, with at least one four-star bird guaranteed.

Occasionally, there will be an offer to get a free Premium Egg in return for watching a video ad.

There is also a Regular Egg, which gives you a one to four-star bird, but this is instead bought using socially-generated currency Friendship, which comes exclusively from sending gifts to - or receiving them from - friends and clan-mates.

Birds are in plentiful supply, with low-level birds often given as rewards for completing battles.

Regular and Premium Eggs can also be exchanged for Regular and Premium Hatch Tickets, which can be given in Chests as rewards for winning battles. Regular Tickets are quite common, while Premium ones appear only very occasionally after boss fights.

But for the average player, birds are in plentiful supply. Regular Tickets are doled out regularly enough, and low-level birds are often given as rewards for completing battles.

These can then be used to upgrade other birds in Evolution's fusion system, which itself should be enough to keep up with the game's difficulty curve and maintain a competitive squad.

For dedicated players, like in Rovio's other recent launch Battle Bay, Evolution also features an optional subscription offer of one Premium Hatch Ticket per day and an extra 10% Gold and Gem bonus for $25.49 every month.

But in general, more limited than birds is soft currency Gold, which is required for the fusion process. This means either using Gems as a replacement, or completing more battles.

The game also features scouts, which are used to unlock areas with enemies to battle and rewards to earn. However, you only have three scouts and each takes 50 minutes to restore after use. To restore all three costs 150 Gems.

The player can be faced with a choice of either waiting for timers or paying money.

Another area of the game that's energy gated is the PvP league system, which gives the player two free battles every few hours (although this wait can be skipped with a video ad) and costs 100 Gems per battle after they are depleted.

This means that if the player reaches a point in the campaign where they need to upgrade their birds, but can't afford the fusion costs, they can be faced with a choice of either waiting for timers or paying money.

It's clear to see the route Angry Birds Evolution is taking in its inspiration from gacha-focused mobile RPGs from the East, and the core loop should be familiar to anyone who's played such a game.

And the pressures, too - the multiple currencies and resources to consider, the need to upgrade using a currency that's relatively scarce, different modes having their own energy constraints - are no new phenomenon either.

None of this stands in the way of Angry Birds Evolution being entertaining, and scenarios in which the player faces an ultimatium to either wait or pay are rare, but there also exist mobile RPGs with similar systems that limit the player less often.

But perhaps this has something to do with where Rovio now finds itself pitching Angry Birds, as it moves further away from the casual arena and aims to compete with efficiently-monetising midcore competition.

How does Rovio's Battle Bay monetise?