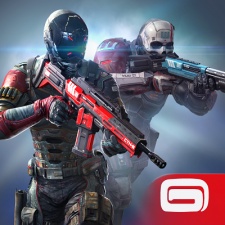 This time we're taking a look at Modern Combat Versus, the latest in Gameloft's long-running first-person shooter series.

Since the takeover by Vivendi that promised “a great collective adventure” back in June 2016, Gameloft has launched a number of new titles.

The apparent strategy has been to focus on the power of its existing franchises, with new entries in the Gangstar, NOVA and Asphalt series all launching in 2017 so far.

But none of these games have gained much traction. Gameloft will be hoping it's a different story with the recently-released Modern Combat Versus, which is the latest entry in the FPS series that began life as the studio's answer to Call of Duty.

Here, gritty realism is out in favour of quick, online tussles in which two teams of four - made up of a diverse range of characters, each favouring a different play style - compete to control and protect an area.

Under pressure to perform, does Modern Combat Versus have what it takes to save Gameloft's 2017?

It's a sign of the times that Modern Combat, a series whose Call of Duty: Modern Warfare influence is writ large in its very name, no longer seems to be looking to Activision's franchise for inspiration.

Instead, its cast of colourful characters owes more to Overwatch - despite clearly inferior design.

And of course, as is becoming a given for PvP mobile games, Modern Combat Versus also takes inspiration from Clash Royale with a timed reward mechanic and four slots for locked Crates.

Crates can take several hours to unlock, or the timer can be bypassed using hard currency Diamonds. Timers can also be chipped away at 30 minutes at a time by watching a video ad.

With Crates awarded for every win in multiplayer, and for every three wins in solo play, the idea is that players will eventually begin to lose their rewards after all four slots are full, thus encouraging them to use Diamonds or watch ads to free up space.

These are used primarily to skip wait timers, but they can also be used to buy Small (130 Diamonds), Medium (280) and Large (540) Crates, which contain XP for characters and other currencies.

Coins are included in these Crates, and can also be bought using Diamonds.

The primary use of Coins comes in character upgrading, which again borrows heavily from Clash Royale; a character becomes eligible for an upgrade when a certain number of their card has been collected, and Coins are used to finish the process.

Coins can also be used to buy these character cards - here called XP - individually in a so-called Black Market where stock rotates every few hours.

But while Coins can be collected from Crates earned through standard play, this isn't the game's soft currency.

There's a move away from energy gating to encourage play.

That would be Korpens, earned by playing matches and opening daily crates, which can be saved up to unlock new playable characters.

It's an example of what's becoming a necessary trend in PvP games: a move away from the energy gating of the past to instead encourage continued play and keep the player base active.

Another example of this is the participation reward system, which offers progressively higher-value crates - the highest coming after six battles - for every day.

This also means that even if you're not winning games regularly, you won't hit a dead-end. Pleasing too is the option to watch video ads instead of paying Diamonds to skip wait timers.

But for the average player it's the free and daily reward Crates that will keep them coming back, with the pace and size of these rewards more than sufficient to maintain a satisfying loop.

Though the gameplay itself is relatively distinct, there's a massive sense of familiarity to everything thanks to how heavily the metagame borrows from Clash Royale.

With its influence only spreading, this seems like something we need to get used to.

How does Gangstar New Orleans monetise?

How does Shadowgun Legends monetise?