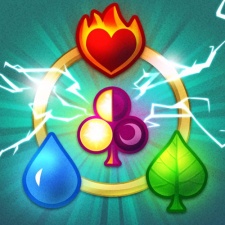 This time we're taking a look at Battlejack, the Blackjack-inspired, squad-based RPG developed by Grand Cru and published by Nexon.

Battlejack was the chosen as the game of 2017 by PocketGamer.biz contributing editor Jon Jordan, while its publisher Nexon was named 25th in PocketGamer.biz’s Top 50 Developer 2017 list.

If one were to cherry-pick elements from mobile's top grossing games to create a sure-fire hit, a mixture of casino gaming and gacha RPG may well be the recipe they arrived at.

And while its process was probably not this straightforward, this is the essential pitch from Finnish studio Grand Cru for Battlejack: a game featuring a combat system based upon the classic card game Blackjack.

In turn-based combat, every attack phase begins by drawing a card from a standard deck. The closer you get to 21, the more potent your attack. Overshoot, and like in regular Blackjack, you're bust; you deal no damage and the enemy takes its turn.

It is not a reinvention of the wheel, and elsewhere the game has a familiar feel. The basic formula of collection-fusion-gacha remains, as does the elemental aspect of characters and their attacks.

But the marriage works surprisingly well, in a genre where a little innovation goes a long way.

Monetisation-wise, being a Japanese-style RPG developed in Finland, Battlejack takes inspiration from home and abroad.

The most immediately visible pillar is the timed reward chests, which unlock in four slots over a set period of time, as popularised by fellow Finns Supercell with Clash Royale.

This means that one of the main uses for Gems, the game's hard currency, is to skip wait timers and unlock these chests immediately – also, crucially, freeing up a slot into which a new reward chest can go.

50 Gems can also be used to grant the player a second chance in a battle, when all their squad members are downed.

Another technique used by Battlejack that's more from the Western monetisation playbook is the rewarded video ad, with the player able to call upon two every hour or so in return for free Gems.

Each bundle has its own one-time discount, yielding double the number of Gems.

But for the most part, Battlejack's monetisation is more comparable to any number of Asian RPGs based on similar systems.

However, each bundle has its own one-time discount, which yields double the number of Gems at the same rate.

This kind of deep discounting to help players get over the psychological barrier of the first spend seems sensible and no doubt offers good value for players.

Known as annuities, these kinds of bundles offer better value for players who like to plan ahead.

When it comes to actually spending these Gems, there are two main uses: summoning heroes and buying or unlocking Chests.

A rare summon costs 300 Gems – which is $4.99 under regular pricing – while the Coin Chest, Royal Chest and Rainbow Chest cost 260, 500 and 2,800 Gems respectively, each offering different configurations of Gold, Runes and upgrade materials.

The primary function of Gold is to upgrade characters.

Free chests are available every few hours, and you're also given a generous 120 Gems – worth approximately $1.99 – to start out with. Free summons can also be earned as rewards.

The primary function of Gold, meanwhile, is to upgrade characters. This is done in the standard way: characters are strengthened by fusing unwanted ones into them, using Gold to complete the process.

It cannot be bought directly using real money, but the need for Gold is one of the main reasons to unlock Chests.

Since only one Chest can be unlocked at a time, players also have an option to buy a second Chest unlocker for $6.99, which enables two Chests to be unlocked simultaneously for 30 days.

This is a limited time boost, so for long-term players it could serve as a recurring purchase almost akin to a subscription.

Battlejack doesn't have a whole host of new ideas monetisation-wise, then, but it manages to hit upon a player-friendly blend, creating an in-game economy that works for spenders and non-spenders alike.

Reply
Min Zhang
This game has an energy system and timed reward chests. There's a warning for continuing to use your energy when your chest slots are full. Energy can refresh as fast as 1 hour...but mid game chests are already 8-12 hours.
It doesn't make any sense.

Gameplay is good though. Nexon seems to be getting pretty good at publishing games with innovative gameplay tweaks but completely bonkers monetization mechanics.
Posted 4 years, 5 months ago