Lion Studios and Playgendary follow in second and third 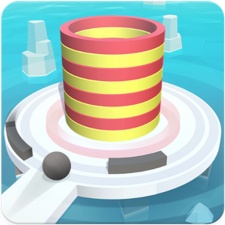 Voodoo generated by far the most hyper-casual game downloads with 771.1 million installs between Q4 2018 and Q1 2019, according to market intelligence firm Apptopia.

The Paris-based publisher led the list by more than 150 per cent when compared to the next competitor. The company's hit titles include the likes of Hole.io, Helix Jump, Fire Balls 3D (pictured, main), Ball Mayhem and Roller Splat.

This is not entirely surprising considering that at Quo Vadis 2019 Voodoo Berlin GM Alex Willink confirmed that the company had passed two billion mobile game downloads.

Over the two quarters, Voodoo had an average of 8.5 games per day in the top 50 downloads, while ranking in the number one spot 13 times.

All of these publishers have released multiple games, with Voodoo so far launching 15 in 2019 alone. Ninth-placed Crazy Labs managed to release 10 games in that time too.

We recently spoke to Voodoo technical lead Wesley Clarke about his work at Voodoo making games that are downloaded by 10s of millions of people.

Learn more about hyper-casual games on the Instant Games and Hyper-casual track at Pocket Gamer Connects Seattle, which takes place on May 13th and 14th.