Not so mobile; Americans mainly play on their phones at home says MocoSpace

52% claim to play more than a hour daily

March 22nd, 2012 - 01:00pm
By Tom Worthington
Gamers spend more time at home - in bed - playing mobile games than out and on-the-go, according to a new survey from gaming portal MocoSpace.

Revealing the results of its Where u play? survey, which studied over 15,000 gamers last month, 96 percent claimed to play mobile games at least once a day at home, and 53 percent said that in bed is where most of gaming takes place.

"Mobile gaming is not a companion to consoles, but rather its attacking them on their home turf: the couch, the La-Z-Boy and even the bedroom.

The bedroom might be the most popular place to play out a quick game or two but the living room came at a close second with 41 percent.

Only five percent admitted to gaming in the bathroom and just one percent confessed to cheekily gaming at the dinner table. 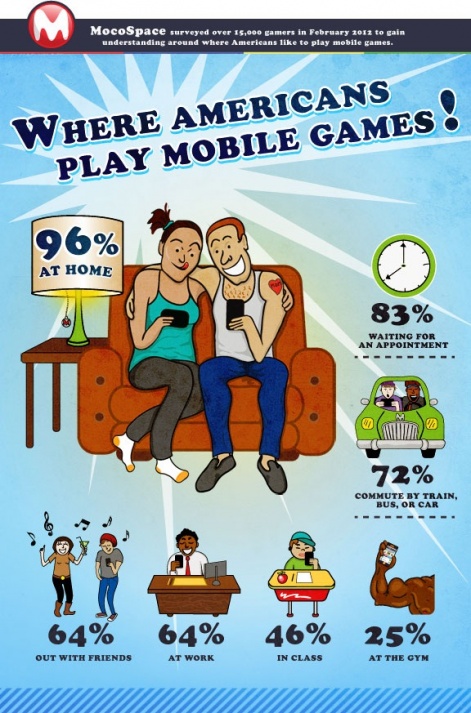 Playing mobile games while waiting for an appointment, commuting, at work, and while out with friends were popular hotspots in MocoSpaces research.

The report also found that mobile games are played for longer durations than you might expect.

52 percent admitted to spending an hour a day playing mobile games and 32 percent racking up three hours of game time on a daily basis  10 percent of those claimed to do so during work.

The final conference schedule for Pocket Gamer Connects Digital #6 has been locked in!