User retention also on the up

As detailed in the firm's new quarterly reports package, TinyCo claims games tailored for Android are starting to outperform their iOS equivalents when it comes to average revenue per paying user (ARPPU) - especially in the case of Amazon's Kindle Fire.

"In our game Tiny Village, ARPPU on iOS and Android are the same, and later in the product lifecycle we are seeing weeks where ARPPU can be between 25 percent - 40 percent higher on Android," stated TinyCo in its report.

"This will shrink as more players become payers on Android  as platform experience improves - and hopefully the overall balance of a average revenue per user (ARPU) and ARPPU begin to look closer on each platform."

Key to Android's ascent, however, has been a rise in the seven day retention rate.

As TinyCo points out, the longer a customer can be kept on board, the more potential there is for converting them into paying players.

"In Tiny Village, we are now seeing on average over 7 percent higher day-seven retention on Android over iOS," the firm concludes.

"With constant optimisation we've increased retention on Android to higher levels than iOS, and we are seeing higher ARPPU. Our next challenge will be to continue to optimise the

user experience as best as possible to increase conversion.

"With user satisfaction continuing to evolve, and better store experiences on the way, we are very bullish about the future of the Android platform and Google Play."

In regards to iPhone, TinyCo notes the next frontier for developers will be better integrating Facebook into their titles, with iOS 6 building elements of the social network into its very heart. 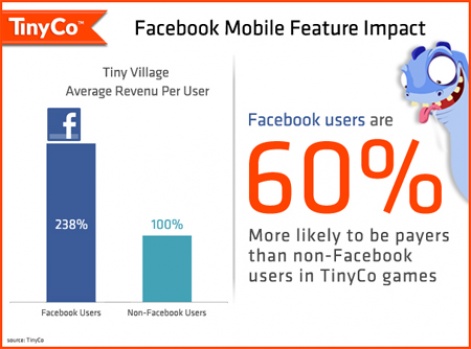 Though its own experiences with Facebook are currently limited, the firm claims players engaging with simple measures such as gifting, invites and other Facebook features monetise 138 percent higher than normal paying users.

Said users are also more than 60 percent more likely to be paying users than non-Facebook players.