A Brief History of Mobile Games: 2004 - Money for Nothing? 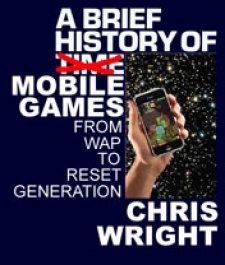 As we're all finding out, when someone gives you cash, unless you call them Nana and/or Gramps, at some point they'll want it (and a bit more) back. The neat difference with venture capitalists however, is that for awhile you can continue to squeeze out some more.

After all, if you've persuaded them to give you $10 million, if the next option you present them with is give you a further $5 million in the hope of extra future profits, either that or lose the entire $10 million right now, chances are they'll cough up.

This dynamic - which if skillfully played you can employ two or three times - combined with the first solid sales figures meant that 2004 was the peak of the mobile gaming investment bubble. In fact, the industry was so awash with money, the atmosphere was akin to a goldrush.

IOMO had started life in 2000 when John Chasey (pictured) and Glenn Broadway decided to give up on consoles games and do something different. They originally developed WAP games, including a couple for Digital Bridges such SMS text/dating game TxtDating, which was written with the help of Richard Bartle (the co-inventor of MUDs), and Wentworth Golf, which was a fully 3D golf simulation of the Wentworth Golf course. The technology for this became Tiger Woods Golf, which unlike JAMDAT's US version, was fully 3D, although they did also have an SMS version of Wentworth Golf. IOMO then went into the publishing space, releasing a range of popular pub-themed games with Vodafone, before finally being bought out by Infospace.

Completing the financial inflows for the year, French publisher In-Fusio raised $27 million from its investors and Kayak Interactive (which was co-founded by Digital Bridges' founder Kevin Bradshaw) raised $12 million.

Someone, somewhere thought the next decade would see a lot of companies selling a lot - in fact, massive amounts - of mobile games. But back to the bit about people eventually wanting their money back...

US publisher JAMDAT Mobile had been around since March 2000, and during the next four years had raised $30 million. Now it was payback time for its backers such as Apax, Benchmark and Qualcomm as JAMDAT filed its plans for an Initial Public Offering. Its shares were made available on the NASDAQ exchange in early October, raising $89 million to pay back investors and fund future operations, and valuing the whole company at over $400 million.

EA had been interested in mobile since 2002, when such operations resided in its EA.com division. However, EA didn't make mobile games itself, instead preferring to license out its two largest brands, EA Sports' FIFA and Tiger Woods PGA Tour. And rather than pick a single company, EA split the licence between Europe and the US. JAMDAT was the most successful mobile publisher in America, as well as already possessing a strong line of sports games that could be quickly converted.

In Europe, the decision was more difficult. The dominant company was Gameloft, but it was part-owned by Ubisoft, which was a growing rival to EA in the console space. For that reason, Digital Bridges eventually won the licences, quickly turned them into cash cows.

Two years on from this decision however and EA started to consider setting up its own dedicated mobile arm. Spurning JAMDAT, it decided to do this in conjunction with Digital Bridges - working together to build a mobile gaming goliath. Things looked great for Digital Bridges and bad for JAMDAT, but history tells us never to count your chickens...

Still, when it comes to the mobile games released in 2004, it was the start of domination of big, brash licences. Racing games are the biggest console genre and mobile followed suit, with two of the top five mobile franchises being launched in 2004.

The Fast and the Furious: (Digital Bridges)

Still, the first The Fast and the Furious game was actually a pretty good topdown racer. It was based on an original street racing game that was in development at London studio Morpheme. I was shown it just as Digital Bridges got the film license and the two were put together.

Another interesting fact was that despite being the film that kickstarted the street racing genre dominated by the likes of Need for Speed and Midnight Club, it took years for Namco Bandai to release a console version of The Fast and the Furious. Various false starts and canned development meant that while the mobile version was massively successful, the console version looked like a bad copy of everything that had come before it.

Asphalt Urban GT was Gameloft's answer to the street racing craze. This took the behind-the-car fake-3D approach, threw in some licensed cars and came up with a pretty nice if functional racing game. Visually the game looked impressive, played well if you had a reasonably powerful handset, and was good fun.

Gameloft sold a lot of copies and has since released three follow ups which have slavishly followed the concept. The biggest addition has been the inclusion of the Pussycat Dolls. And why not?

If The Fast and the Furious and Asphalt Urban GT are good examples of successful racing games, Sorrent's Driv3r is the cautionary tale. Thanks to the multi-million selling PlayStation games, by 2004 the Driver franchise was pure gold, so Sorrent, through its relationship with Atari, had the biggest driving license of the time.

Unfortunately however the console version of Driv3r was one of the year's grand turkeys, and the mobile version wasn't much better. It took the topdown visuals of The Fast and the Furious, muddied them up, and then added a free roaming aspect that meant everyone got lost. The game sold well, but was universally panned. The follow up Driver: Vegas was little better and even Gameloft, which eventually acquired the license from Atari, couldn't save what was a tarnished brand. Driv3r should have been the sell out racing game, but died the death.