99-cent titles not (quite) as dominant as you'd think 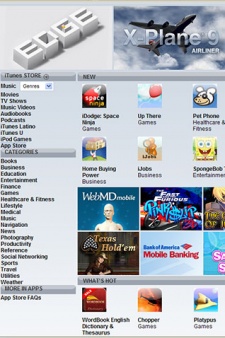 July 9th, 2009 - 12:14pm
By Stuart Dredge, Contributing Editor
Are 99-cent games dominating the App Store charts? It's a suggestion we hear fairly often from unhappy developers, so we thought we'd dig into it.

We've taken a snapshot of today's Top 100 Paid Games chart from the US App Store, and crunched the data to draw out some trends.

They include pricing, but also product lifespans, which publishers are having hits, and the balance between brands and own-IP. 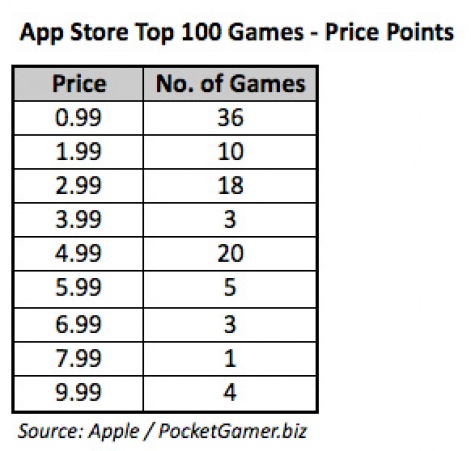 In fact, the average selling price of a game in the Top 100 today is actually $3.20. That's low compared to what operators traditionally charged for J2ME and BREW games, but higher than you might have expected.

However, it is true that cheaper games are dominating the upper reaches of the chart. Let's break it down by ranking bands: 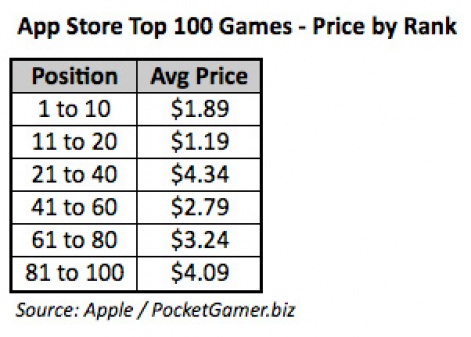 But check that sweet spot a bit lower down, in the 20s and 30s, where the average selling price is 2.3x that of the top 10 games.

iPhone and iPod touch gamers certainly like their new games. 40 of the titles currently on the App Store's Top 100 Paid Games chart were released in June or July this year. Another 22 were released in April or May.

Just five titles that were released alongside the App Store in July last year remain on the chart. Is this a problem? Not necessarily - if we compare it to another industry, the App Store games chart is clearly more like the music singles chart than albums. It's a fast turnover.

The App Store continues to distribute wealth widely among the development community. 64 different companies are represented in the Top 100, and 17 in the Top 20 alone.

It's interesting to see which companies have several hits on the go, though. Only five publishers - and they are all publishers as opposed to developers - have three or more games on the chart: 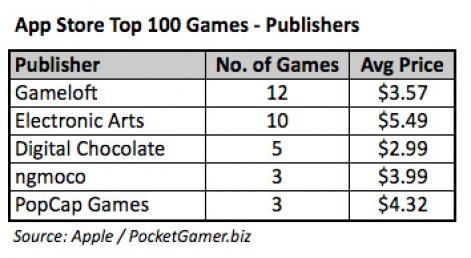 The pricing aspect is interesting here, too. EA is making a great effort to maintain premium pricing for its iPhone games, with an average selling price of $5.49. It might not have any games in the Top 20 today, but it's not being drawn into the price wars just yet.

Gameloft is trying a different strategy - more than half of its games in the Top 100 are selling for $4.99, but it's also trying the $0.99 price point with three titles, including the number one ranked game Hero of Sparta, and sixth-placed Real Soccer 2009.

A common complaint about traditional operator decks is that they were dominated by brands, with own-IP titles rarely getting a look-in. How does the App Store compare? Well, it's a different kettle of fish entirely:

More than half - 52 - of the Top 100 Paid Games are own-IP that's new for iPhone, as the following table shows: 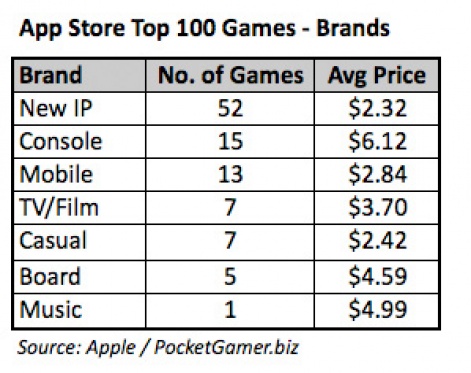 In fact, the outlook for own-IP is even better if we consider those we've filed under Mobile, as these started life as own-IP games on J2ME and BREW platforms - all of DChoc and many of Gameloft's games count in this category.

However, console brands are a presence on the App Store chart too, with 15 of the Top 100. And interestingly, they're maintaining higher price points than own-IP games - an average price of $6.12 compared to $2.32.

This reflects the desire of the companies selling console-derived iPhone games to charge higher prices, of course.

Is iPhone proving a lucrative new distribution channel for games from the casual world? Not at present. PopCap may have three games in the Top 100, but overall there are only seven titles in the chart that started life as casual games.

Crunching all this data is great fun, and throws up some useful lessons. Of course, to make it really useful, you'd want to factor in actual sales figures - for example, by what factor is a $9.99 game in the 20s or 30s out-earning a $0.99 game in the Top 10, if indeed it is?

Apple doesn't publish figures, of course, and it strongly dissuades (to say the least) publishers from being too open about how sales relate to chart positions.

Meanwhile, the exact formula governing chart positions remains an enigma outside Apple - this too would be needed to really make sense of the data above.

Even so, we think this snapshot is pretty interesting. Let us know your thoughts on the data and our analysis with a comment.