Bouncing ever upwards: The making of Doodle Jump

How Lima Sky hopped to the top 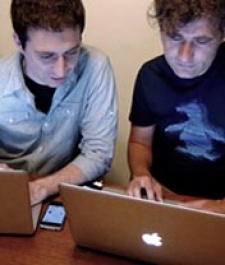 September 8th, 2009 - 08:30am
By Jon Jordan, Contributing Editor
At its best, the 99c game is a perfectly-formed slice of bite-sized fun in which everyone can partake.

There aren't many examples, but one such is Lima Sky's Doodle Jump; a game so simple and yet so enjoyable that playing it always makes you happy and you always want another go.

Add in its social networking features, regular updates, and mash-ups with other games, and it's no surprise Doodle Jump has been in the App Store charts for months.

We caught up with developer brothers Igor and Marko Pusenjak (photo credit: Jasna Pusenjak) to find out more.

Pocket Gamer: Before we start on Doodle Jump, can you give us some background to Lima Sky?

Igor Pusenjak: Lima Sky was founded in July 2008, shortly after the iTunes App Store launch, with the release of our first iPhone app, iBubbleWrap!

At its core, the company is my brother Marko and me. Marko, who's a veteran mobile applications developer, does all the programming, while the graphics are my responsibility. On the business side, we both work on product management, with Marko taking the lead. My focus is marketing and business development.

What was the inspiration for Doodle Jump?

Igor Pusenjak: One of the first games we released for iPhone was Eat, Bunny, Eat! Your goal, as a bunny character, was to catch and eat carrots that fall from the sky.

Soon after its release, we started working on a sequel that was going to be called Hop, Bunny, Hop! The game engine was done fairly quickly, but we had trouble getting the graphics to look right. Frustrated, we decided to take a little break from it.

When we came back to pick up where we had left off the Hop, Bunny, Hop! project, we realised we preferred the pencil-drawn sketches to the art we had, and then it hit us - we should just make this game using the hand-drawn style, similar to the style we used for our Classic Tic Tac Toe game.

We started going in that direction and liked what we were coming up with, and since the art style had changed, we decided to create a whole new storyline for the game.

How did you manage to keep it so clean and simple?

Igor Pusenjak: I'm a big fan of clean and simple and Mies van der Rohe's 'less is more' approach, probably because I have a hard time achieving it in life.

While I was at Parsons School of Design working towards my MFA, one of my professors mentioned Antoine de Saint-Exupery's quote "Perfection is achieved, not when there is nothing more to add, but when there is nothing left to take away," in the context of design, and this has been the rule I have been trying to apply to every project I work on.

How much discussion did you have about the shooting mechanic?

Marko Pusenjak: In the first release of Doodle Jump, there was only one direction you could shoot in - straight up. While we felt that this was sufficient, we had repeated requests from players to make it so that you can shoot in different directions. We gave in and started thinking about the best way to implement this.

It didn't take too long to come up with the solution and while we liked it - as we thought it felt very organic - we were a bit concerned it would make it too easy to shoot the monsters.

To our surprise, when the update came out, some players started complaining that it made the game more difficult. So now, there is a setting to turn the directional shooting mode on/off.

Why did you include the "BE WARNED: Insanely Addictive" subtitle?

Igor Pusenjak: We felt the title by itself did not convey how addictive and fun Doodle Jump was. Whoever played the game got hooked right away, but we needed a way to relay that to the people who had not had a chance to play Doodle Jump and were just browsing the App Store.

Another subtitle we were considering was "WARNING: DO NOT buy if you value your life".

It's important to note both were taken from the actual user reviews, as is the case with many of the other claims we are using to market the game.

How did the in-game score markers come about?

Igor Pusenjak: Doodle Jump was the first game ever to implement in-game score markers, displayed in real time to all the players around the world.

Early on, we knew we wanted to add an element to the game that would somehow connect the players around the globe, and give Doodle Jump an additional unique aspect that we were hoping would help catch Apple's and various iPhone apps review sites' attention.

My personal interest throughout my work (and artwork) has been the exploration of connections between the physical and the virtual, and how the two can interact and influence each other.

So, I started devising this complicated scheme where if a black hole sucked you in, you would be spat out at another (random) player's screen, and that player would have a chance to somehow save you and send you back to your screen. It sounded cool, but it was a mess. Marko suggested the score markers, and I thought it was brilliant.

Simple, elegant, unique, and above all, easy to grasp.

Marko Pusenjak: The initial development took around two months. Each update takes around a week to two. All the code has been written from scratch in Xcode.

What were the biggest obstacles you had to overcome?

Marko Pusenjak: As soon as the iPhone 3GS came out, we started getting complaints from the new owners that they were experiencing sluggish performance of Doodle Jump on the their new devices. Baffled, as 3GS was supposed to be (and is) significantly faster that 2G/3G models, we rushed to get 3GS and start fixing the problem.

It took 10 days of in-depth testing to get the game's performance back to normal on 3GS. The culprit was the new OpenGL hardware that handles certain things differently than the hardware in the older models.

When did you realise you had come up with something special?

Igor Pusenjak: When my wife, who does not play video games, couldn't put Doodle Jump down.

How did you approach the issue of thinking up items such as the jet pack for the updates?

Marko Pusenjak: New update features are a combination of our ideas and user suggestions. We try to strike a balance between adding new power-ups and obstacles, and aim for the one new obstacle per one new power-up formula to maintain the game's difficulty and level of challenge consistent.

What inspired the mash-ups with Pocket God?

Igor Pusenjak: We were trying to come up with different ways to promote Doodle Jump since traditional paid banner advertising initially proved not to be effective enough due to the cost.

We have been big fans of Pocket God and always though it would be hilarious to put its pygmy character in Doodle Jump somehow. When the idea of adding an easter egg into Doodle Jump crossed our minds, placing Pocket God pygmy as the easter egg character seemed perfect.

We approached Dave and Allan [Bolt Creative] with the idea and they loved it. It was a fun way to cross-promote the apps, and since this was the first time it had ever been done, we managed to get some great press coverage as well.

So far, in addition to the Pocket God mash-up, the little green Doodle Jump Doodler has made a cameo appearance in The Creeps!, and is about to be rolled around in the upcoming update of Bumper Stars.

Were there any surprises you had in terms of feedback?

Igor Pusenjak: We have been greatly amused by and love all the witty comments people are leaving on iTunes and elsewhere about Doodle Jump, such as the one by a fan stating they were pulled over for playing Doodle Jump while driving and then managed to get out of getting a ticket by showing the game to the cop who immediately went on to download it.

Or another by a guy who writes he got dumped for playing Doodle Jump too much and then kept on playing as his girlfriend walked away.

We have also been really pleasantly surprised by and appreciative of all the great reviews Doodle Jump has been getting in the media.

Why do you think Doodle Jump has been so successful?

Igor Pusenjak: It's a combination of things. Doodle Jump has insanely addictive gameplay and is, as clichéd as it sounds, easy to learn and hard to master.

Being a simple pick-up-and-play type of a game, it is perfectly suited for the device, and the hand-drawn graphics appeal to most of the players. Additionally, we have been releasing regular updates and have been working hard on innovative ways to promote and market the game.

What parts of Doodle Jump are you most happy with?

Marko Pusenjak: The score markers for being a fun visual representation of how far other players have managed to get to and for the fact that Doodle Jump was the first game to implement those.

I also love the rush you get when the jet pack shoots you up, and always laugh when I pick up the propeller hat.

Manoeuvring your way to jump on top of the monsters and bringing them down is another one of my favourite thrills in the game.

Can you say anything about any other games?

Marko Pusenjak: We have a couple of new games in the works, but those are still in the very early stages as all our time is currently spent on Doodle Jump.
Thanks to Igor and Marko for their time.

You can find out more about what Lima Sky is up to on its website.
Doodle Jump is available priced 99c, 0.79 or 59p. [App Store Link]


And check out our other Making of interviews such as
Glyder