How Full Fat improved on its spy-themed endless runner 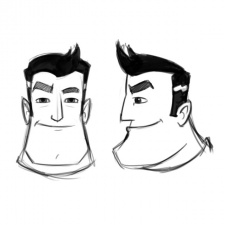 How do you stand out when the party is already crowded? According to Agent Dash, you rent a tuxedo, switch to covert mode and invent some new dance moves.

With a rich history spanning development across GameBoy, PSP, Nintendo DS, Wii, PC and 3DS, UK outfit Full Fat Games made the transition to being a dedicated mobile studio in 2010.

Industry veteran Ashley Routledge, Full Fat's creative director, joined the company in 2008, before the company transitioned to mobile, and was one of the driving forces behind the company's new mobile focus.

It was time to tackle something new.

The team were fans of Canabalt and Temple Run and wanted to make something similar - something that suited mobile with simple, slick controls.

Once the spy theme was decided, there was no going back.

"Overall it was a combination of the idea, the theme, the capability within the studio and looking at what was right for mobile in terms of fun with simple control inputs," says Routledge.

"There was a lot of passion throughout development, from character design to the run-and-jump gameplay."

This passion is evident in the game's style and personality, riffing on influences such as James Bond, Austin Powers, The Avengers (the campy British TV version) and The Incredibles - as seen in the chunky cartoon visual style.

These influences, beyond the art style, shaped the game as a whole.

"We work in a traditional way, coming from our console background, with a lot of concept artwork before 3D models are created," says Routledge.

I call it an update, but really it's an entirely new game - everything has been rebuilt from scratch.

"We started with the playable hero characters, with Agent Dash as the suave but mildly clumsy hero, and the sexy but deadly Joanna Goodtug. Then we moved onto villains like Bobajob and Jawbone."

Standing out in a crowd is difficult enough, but when you're an endless runner and a covert operative, you have to work extra hard. That's why Full Fat made some innovations that have since been used by other endless runners

"We were among the first few runners on the App Store, with Agent Dash launching originally in summer 2012," remembers Routledge.

"At that time we were competing primarily with Temple Run. It was through our spy theme that we felt our unique features grew: the gadgets, the different environments and destroying bases.

"We were one of the first, if not the first to introduce the swipe to change lane gameplay, which is now used in almost every other running game. Before that, the norm in the genre was tilt controls."

This innovation paid off and the game has enjoyed strong success.

Despite the having more than 20 million installs worldwide, Full Fat isn't resting on its laurels though, and three years after the release of Agent Dash, has just released a huge update.

"I call it an update, but really it's an entirely new game - everything has been rebuilt from scratch," explains Routledge.

"Part of the reason is to bring Agent Dash into 2015, as the original game wasn't quite up to the standard we wanted, mainly due to the huge leaps in hardware capability in the past three years."

The foundation of this process has been rebuilding the whole game in Unity, enabling the addition of hills and bends that replace the straight lines and sharp corners of the original game.

Spy gadgets can now be equipped while running, characters have individual perks and the entire front end is brand new.

"The difficulty, speed and balance of the game have been changed, with all new level design, more objects to jump over, slide under, destructible objects, more variety in length of sections and smoother ramp in game difficulty," he adds.

"We're only just beginning our plans for the future of Dash. This is the first update of many coming throughout 2015."

Another addition is the inclusion of younger characters, like Dash Junior and Agent Riley - Agent Dash's children.

The inspiration for this comes from shows like Ben 10 and James Bond Jr. Fans of the game's wacky characters will have to wait to find out who their mum is.

"The biggest challenge for the new Unity version of Agent Dash was to achieve a balance between maintaining the original core gameplay, while adding new features," adds senior game designer Venita Pereira.

The biggest challenge for the new Unity version was to achieve a balance between maintaining the original core gameplay, while adding new features.

"We needed to stay true to the original vision that made it a successful game enjoyed by millions of fans, while adding new things to freshen the appeal.

"The game benefits significantly because we can add a vast amount of content in a relatively short amount of time. This means that Dash's fans can expect bigger, more frequent updates as we continue to add to his future adventures."

One thing that won't be changing is the price point - Agent Dash will always be free-to-play.

"I think the way the mobile market is now, there's no other choice for a running game," Routledge explains.

"There are a lot of people out there who only play free-to-download games and there are a lot of fantastic F2P games to choose from. Even back in 2012 it was the only way a running game could be financially viable, and since then our paid games have seen a drop in revenue in like-for-like chart positions year-on-year.

Of course, he understands some gamers prefered the paid route, but that's not the commercial reality.

"We have the benefit of seeing both paid and free results in our past games, and the reality for us is that F2P is the only way that this kind of game can support the company, our employees and their families," Routledge says.

"Understandably a lot of players would love to see all games available with everything unlocked for a few dollars, but the reality is that we, and others, would go out of business. There are always exceptions, but a lot of the game's structure and design depends on the financial model and game genre."

Because of these informed choices, Full Fat Games looks to enjoy continued success over the coming years, with more updates planned for both Agent Dash and some of the studio's sports titles.

There's also a new game launching soon, but if Routledge told us what it is he'd have to dispatch a team of agents to take us out.