Your guide to the Pocket Gamer Mobile Games Awards 2019 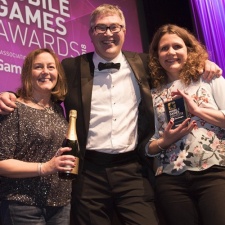 What are the Pocket Gamer Mobile Games Awards?

The Pocket Gamer Mobile Games Awards, taking place on the second evening of Pocket Gamer Connects London 2019, will recognise the work of the top games companies in the industry over the last year.

As you can see below, these awards represent firms across the industry, from the games developers and publishers to the tools companies, service providers and recruiters that all make this sector the largest and most pervasive in gaming.

How do I nominate and am I eligible?

To nominate your company and/or game, or to lobby on someone else’s behalf, please read the guide below to see what awards the game and/or company is eligible for. You can lobby for a company in as many categories as you like.

Once you’ve found the appropriate awards, head on over to our online form which will guide you through the process: www.mobilegamesawards.com.

We’ll ask you for details on the company and its achievements during the last year, or why a game deserves an award. Please detail these in a bullet point format that simply state your reasons for nominating.

Once you have filled in the form and sent it, that’s it! Please note that lobbying does not guarantee a place on the list of finalists. The deadline for lobbying is Monday, October 29th.

What are the categories?

We go into the categories in detail below, but if you’re after a quick glimpse, here are the categories for the second ever Pocket Gamer Mobile Games Awards:

What happens after the lobbying phase?

Once the deadline passes for lobbying, the team at PocketGamer.biz will whittle down the longlist to a shortlist of finalists for the Pocket Gamer Mobile Games Awards. A panel of mobile games industry experts from across the sector will then vote for what they feel is the best company or game in each category. Those who receive the most votes will be named the winner of that category, which will be announced during the Pocket Gamer Mobile Games Awards live in January.

The Mobile Legend and Eastern Trailblazer awards, which recognise industry icons and heavyweights for their lifetime achievements and contributions to moving the mobile sector forward, will be specially chosen by the team at Steel Media.

When and where will the Pocket Gamer Mobile Games Awards be held?

How can I attend?

The Pocket Gamer Mobile Games Awards 2019 will take place in London at an as yet unannounced venue. To buy tickets, visit the official website here: www.mobilegamesawards.com.

What if I want to sponsor the event?

And without further ado… here’s the full lobbying guide for the first ever Pocket Gamer Mobile Games Awards!

1. Game of the Year
This award recognises the best mobile game released over the last year based on creativity, innovation and success. To be eligible for this award, games must have been given a full release from October 1st 2017 onwards.

2. Pocket Gamer People’s Choice
This is the only award voted for by consumers and recognises the best new game that received a full release during the last year. This award will be open for voting through PocketGamer.co.uk, with the winner revealed on the night of the ceremony.

3. Best Audio/Visual Accomplishment
This accolade is for any game pushing the boundaries of the medium through audio and/or visual accomplishments. To be eligible for this award, games must have been given a full release from October 1st 2017 onwards.

4. Best Storytelling
This award recognises games that show stellar writing and narrative design. To be eligible for this award, games must have been given a full release from October 1st 2017, or for titles released before this date that have received significant new content in the last year.

5. Best Live Ops
This award recognises the impact of significant updates, in-game events or excellent community management over the last year for games released in 2017 or before, that have helped take a game to the next level and sustain a title’s life.

6. Best Developer
Any mobile games company with 11 or more staff that has released a game, or successfully grown an existing game, during the last year, as well as successfully expanded their business and made an impact on the industry through innovation, creativity and other initiatives.

7. Best Indie Developer
This accolade recognises the achievements of a team of up to 10 developers that have released a game, or successfully grown an existing game, during the last year.

8. Best Publisher
Any company that has supported another developer in releasing a game on mobile devices during the last year, whether through publishing support, marketing, co-development or investment.

10. Best Tools Provider
This award is open to any company providing tools for developers to help make games for mobile platforms. This does not include game engines.

11. Best Analytics Or Data Tool
Any company that supports developers and publishers develop their games and run marketing campaigns through analytics tools and/or providing data on market performance.

13. Best Technological Innovation
Any developer, or technology company that is pushing the boundaries of what’s possible on mobile devices through a new technology, be it hardware or software. This can be an innovative tool or unique use of technology that benefits the industry as a whole.

14. Best Advertising And UA
This accolade is for companies that support the ecosystem through enabling user acquisition or monetisation through advertising and are helping to drive this fast-growing business in games and developers to acquire more users.

15. Best Marketing Team
This award recognises the best internal or third-party marketing team that has created campaigns fueling the growth of games over the last year. This can be through any medium, including online, TV or other.

16. Best QA + Localisation Service Provider
This accolade awards companies that have supported mobile games over the last year in the areas of quality assurance and localisation, ensuring that both new releases and updates go live with as few problems as possible and are localised appropriately for target markets.

18. Best Service Provider
This award is for any third-party service provider or outsourcer that supports developers in making games, whether through art, audio, trailers, UX, or other services.

19. Eastern Trailblazer
This special award recognises a person from an Eastern country who has achieved considerable success in the region and/or on a global scale, whether in recent times or throughout their career.

The Eastern Trailblazer is a special award to recognise the success of those who play a key role in games companies in the East, which have an increasingly influential role in global mobile games industry growth. It is selected directly by the organisation committee of the Mobile Games Awards.

20. Mobile Legend
This special lifetime achievement award recognises a person from anywhere in the world who has achieved a considerable amount of success in their career and has acted as a pioneer in the mobile games space.

The Mobile Legend is a special award to recognise an outstanding contribution to the mobile games industry selected directly by the organisation committee of the Mobile Games Awards.

Submissions now open at www.mobilegamesawards.com! See you on January 22nd 2019.

How to get into Pocket Gamer Connects London 2019 - free!