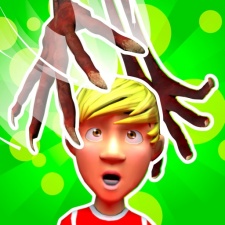 Denis Fedorov is the co-founder of TeaGames.

Sergey Slizhevsky and I founded TeaGames in April 2021 and our first release, a hypercasual brawler called Monsters: PvP Arena, was released just five months after in September 2021.

This was supported by funding from hypercasual publisher Ducky - its first efforts supporting an external team with investment - to add extra expertise to our team, and started working with them as publisher.

As a result, Monsters: PvP Arena reached 37 per cent day one retention, a CPI of $0.26, and 11.6 minutes playtime at the start of the test. After ups and downs, it became a hit. But it took a lot of work, starting with the idea of a nine-year-old boy.

The wisdom of youth

Monsters: PvP Arena started off as a completely different game. In its first incarnation, there were robots instead of monsters, and the game itself was an arcade with a trivial setting.

Unfortunately, at the testing stage we received unsatisfactory high CPI and low CTR, so the publisher advised us to change the setting in order to increase the click-through rate of the ad. It worked.

But critically, the idea to add the notorious monsters from the trending universe came to the nine-year-old son of Ducky CEO Ivan Fedyanin. Considering that kids are strongly interested in monsters and are the first to know the trending ones, the Tea Games development team picked up the idea and tested it.

A low CPI of $0.26 from the start showed the tempting potential. Considering also 37 per cent day one retention and 700 second playtime, we started adding more content and monetisation. There was a lot of emphasis on lots of monsters from different universes - we were trying to offer them as rewards for monetisation.

At the monetisation stage, with the increase in traffic we noticed some expected retention and playtime decreases.

While we continued to work on unit economics along with the publisher, the next drop at the worldwide scale stage was unexpected.

The main reason of the ROI decrease was low ARPU. We did first tests on Facebook, but when we started to connect to other platforms, it dropped. At the same time, CPI fell disproportionately.

We actively tried to lower the CPI and increase the IPM of creatives. The creative team of the publisher made more than 50 different videos (including ones developed on the game engine). We couldn't find a scaling point, all the results were either worse or the same.

What the players want

The team decided to look for a scale solution in the players' behaviour, and dive deeper into users' motivations for paying for certain elements in the game.

We analysed the main Reward placement of the project. The most tempting offer for players was the opportunity to play as trending monsters.

We focused on the leading trending monster and added the opportunity to play for it in exchange for watching a short reward video. The project's ARPU went up.

After this unexpected discovery, we started to look closely into other YouTube trends and other monsters that could become our next stars. That's how we got to the beginning of the Huggy Wuggy trend. We added it to the game, and it paid off, as ARPU went up 170 per cent.

Creatives with the trending character also made CPI one and a half times lower, so we immediately directed Ducky's creative department to intensify the work of the advertising campaigns.

While pursuing the project further after finding a scale point, we are convinced that trend tracking is nor a guaranteed key to making a hit and boosting metrics after the downs.

The trending content approach may not work for every hypercasual game, but digging deeper into what players value the game for and increasing that value always works.