Take a closer look at the Saudi Arabian gaming market and where it’s headed ahead of the PGC Leaders Summit Riyadh, November 30 - December 1 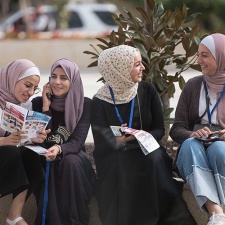 We’re headed to the MENA region this month!

You may have already heard, but Pocket Gamer Connects is coming back to the MENA region this November. We couldn’t be more excited to visit the region once more. We have been holding events in the region since 2017, and we've increased our commitment through a dedicated month of MENA content, a first-ever Top 30 MENA games business guide as well as our events activity in both Jordan and Saudi Arabia this month.

We have a number of opportunities available for you to join us in celebrating the MENA region in person, including our upcoming unmissable conference in Jordan this November 12-13 and a first-of-its-kind leader summit in Saudi Arabia taking place at the end of the month.

Today, we’re shining the spotlight on all the exciting things happening in the Saudi Arabian games industry. Keep reading to learn more about the region and how you can get yourself involved!

The games industry in Saudi Arabia is currently experiencing a massive 41.1% year-on-year growth.

The MENA market at a glance

Today, the MENA region’s domestic market is the fastest growing in the world, touting over 377 million estimated players – this is almost as many gamers as all of Europe combined (386 million) and much more than America (210 million). Along with this booming global success, there’s more and more local development talent sprouting in the area and creating for the local players, with Tamatem, one of Jordan’s leading developers that was founded just in 2013, now having a total value of over $80 million while specialising in localising internationally renowned games to suit Arabic-speaking users.

The growth in this region is beyond impressive, and it’s expected to reach new heights – a recent report suggests the MENA games market reach more than $5 billion by 2025, with a majority of this growth fuelled by increased spending by current gamers, time spent in-game by users and surging advertising revenue according to the report by RedSeer. This is being linked back to a growing interest from consumers that are typically underserved in the region, spanning various demographics such as females and Gen X, as well as the overall gaming market boom provided by the pandemic over the past few years. Another report by Business Wire also believes that growth will also be driven by higher spending per user, and additionally attributes government support across games and esports.

There’s a reason why Saudi Arabia is known to be the 19th biggest gaming market in the entire world, which is no easy feat for a country with only 34.81 million people that tauts over 21.1 million gamers. In Saudi Arabia, 89% of the Saudi population is gamers. It is the highest per capita globally, according to Saud Al-Tamimi, governor of Saudi Arabia’s Communications and Information Technology Commission. In the Kingdom alone, the video games industry revenue is expected to reach over 1 million USD in 2022. The games industry in Saudi Arabia is currently experiencing a massive 41.1% year-on-year growth.

As if this wasn’t enough to get all eyes shifting towards the Saudi market, almost a quarter of the Saudi online population in the country plays mobile games at least five days a week or more! This is a highly engaged player community that has yet to have its full potential tapped into, and it goes without saying that there is potential for big financial gain in the region. Many Saudi players aren’t afraid to spend big on gaming. 32% of Saudi gamers are average spenders on mobile games, compared to Western Europe’s 18%, and 12% are considered big spenders.

The market growth in Saudi Arabia is generally attributed to gamers looking to fill their time, socialising and making friends, and escaping everyday life. However, the Saudi government’s push for embracing technology is what has truly accelerated the growing esports industry in the Kingdom. It’s predicted that the Saudi Arabian esports market will grow by a whopping 250% over the next eight years.

According to the Middle East North Africa Games Market Report 2022, “Saudi Arabia is the gaming powerhouse of Arabic-speaking nations in MENA, balancing population size with high spending power yielding the highest revenue.” There is no time like the present to start making contacts in this evolving market that is on a fast track to becoming a global player for the games industry.

The Kingdom’s Commitment to Growth

It’s predicted that the Saudi Arabian esports market will grow by a whopping 250% over the next eight years.

When both the crown and the growing talent in the kingdom are gazing towards the same technologically advanced, forward-thinking future, massive growth happens.

Such is the case in Saudi Arabia. There’s been an abundance of positive news regarding policies embracing the growth of the gaming sector in this region, with developments as recent as of September 15th about the HRH crown prince unveiling the National Gaming and Esports Strategy marking the beginning of a new era towards leading the gaming sector and making Saudi Arabia the global hub for this sector by 2030 through his Vision 2030 objectives.

The statement highlighted that “The National Gaming and Esports Strategy is driven by the creativity and energy of our citizens and gamers, who are at the heart of the strategy. We are delivering on the ambitions of the gaming community in Saudi Arabia and around the world, with an exciting new career, and unique entertainment opportunities; aiming to make Saudi Arabia the ultimate global hub for this sector by 2030” and later goes on to describe the objectives of this strategy being to raise the quality of life through improvement of the player experience, providing new entertainment opportunities and achieving an economic impact to the gross domestic product directly and indirectly. This development is massive when it comes to acknowledging the increasing presence of the gaming industry in the region, and the region’s commitment to playing a key role in the global gaming arena.

By 2030, the contribution from the gaming industry to Saudi Arabia’s gross domestic product will have multiplied by 50 times, all helped in part by the creation of the Saudi Arabian Digital Content Council’s Ignite Programme. This programme focuses on gaming, audio, digital advertising and video, and $100 million has been approved to fund various entrepreneur and developers’ projects. The support is coming from the top down, and now more so than ever, the future looks immensely promising for this increasingly powerful player in the global mobile gaming market.

Other companies are getting in on the Kingdom’s plans to expand gaming, as well. Saudi Arabia’s Savvy Gaming Group, our partners for the upcoming PG Connects Leaders Summit Riyadh, plans to invest $38.7 billion into the games industry, including a $13 billion acquisition of a leading (but unnamed) games publisher. This major investment will include $18.6 billion focused on financing a variety of “key companies” to acquire minority stakes in support game development, and $481 million is reserved for investments in esports companies and “industry disruptors to grow early-stage games”. A further $4.8 billion will be invested in “mature industry partners.”

Activision recently partnered with the Saudi Telecom Company to introduce dedicated servers hosted in Riyadh and Jeddah for Call of Duty. Riot Games, the masterminds behind League of Legends, established Middle East servers for their game Valorant in October 2020 and Zain Group launched a new esports brand to hold a series of regional online esports tournaments. These are just a few of the examples of the increased presence of esports in the region.

You can read more about companies expanding in Saudi Arabia, and the possibilities of the region, in our recent overview article.

By 2030, the contribution from the gaming industry to Saudi Arabia’s gross domestic product will have multiplied by 50 times.

Join us in the MENA region this month!

As you can see, the MENA region is a key area of growth for the games industry – and it’s still in its early stages. We know how key it is to start making contact with key leaders and rising talent in the area, so we have two unmissable opportunities for you to take part in PG Connects events in the MENA region this month.

The first is our PG Connects conference in Jordan this November 12th to 13th. It’s our second ever conference in the MENA region, and it’s taking place at an all-new luxurious venue just outside of Jordan’s capital, Amman, right on the shore of the Dead Sea. Over 700 games industry professionals will be joining us over the two days for two jam-packed days filled with networking, matchmaking opportunities and insightful talks and panel discussions from over 100 of the global games industry’s top thought leaders. You can currently still secure your spot at our Jordan conference, don't miss out!

Then, we have a highly exclusive opportunity for the global games industry’s top executives to come together to shape the future of the MENA games market this November 30th to December 1st. We’re bringing together the biggest names in the games industry for the PGC Leaders Summit, a brand new event designed exclusively for senior executives to allow for deeper conversations of the big challenges, opportunities and issues that will shape our businesses and the games industry and help forge meaningful connections.

This will take place in the marvellous city of Riyadh in Saudi Arabia, and if you’re a member of senior management at your company, you won’t want to miss joining us in the fastest growing region of the games industry and explore the finest food, culture and adventure of Saudi Arabia. You can register now over on the official website!

Pocket Gamer Connects in Jordan: The Story So Far…

Our biggest show in the MENA region yet kicks off this Saturday! Don’t miss joining us

Gaze into the future of the intersection between games and other media at Pocket Gamer Connects Jordan!