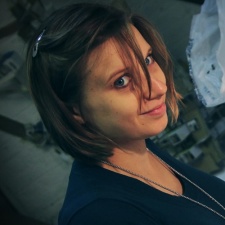 Katherine make computer games and is the director and co-founder of State of Play.

London-based indie studio State of Play has always held a rather hands-on approach to games craftsmanship, especially when it comes to art.

2014’s puzzle adventure hit Lumino City is a handcrafted marvel that substitutes polygons and animated planes for cardboard and paper. The Studio’s Kami series also holds a puzzle element but evokes an origami-like style of visual that keeps within State of Play’s visual atheistic.

It’s certainly an approach that has yielded results. The studio took home the BAFTA for Artistic Achievement in 2015 for its work with Lumino City and it also snagged the Mac App Store Best of 2013 prize for Kami.

So, following on from the studio’s recent nomination for Best Mobile Game from the BAFTA’s with Kami 2 we took the chance to catch up with State of Play co-founder Katherine Bidwell.

You may also recognise Bidwell from outside her work with State of Play as she recently joined the British Games Institutes advisory board.

Part of the work they do includes aiming to provide public and private funding for the games industry to fuel growth, as well as promoting diversity and inclusion across the sector.

Katherine Bidwell: I had a love of games throughout my childhood and was a massive puzzle adventure fan, one of my favourites being ‘Day of the Tentacle’.

As a working mum too, I’m usually juggling childcare and school runs etcetera. But the world of indie games luckily allows me to do that.

My love of art and design led me to a Digital Design degree, which in turn led me to web design and small mini-games, where Luke Whittaker and I started our business State of Play in 2008.

After three years of working with clients, our passion for creating something which we could completely own led State of Play to make its first indie game ‘Lume’ which we self-published, and since then we have been making indie games.

I think the thing about being indie is there is no typical day! However, on an ideal day, my most productive period is the first hour or so, which is usually spent with emails and general administration work.

Then I start looking at the flow of work we have currently in place and then decide what is achievable that day, whether that is game design, project management or narrative-based research.

I’m a great one for lists, so typically I like to write down all I would like to achieve that day and hopefully complete it. Coffee also helps too. My favourite days are when I’m sketching ideas in my sketchbook.

As a working mum too, I’m usually juggling childcare and school runs etcetera. But the world of indie games luckily allows me to do that, as soon as I’m in front of my laptop I’m at work. So it can work out quite well.

I think with running a small company it’s about making sure all the plates are spinning and keeping the focus on achievable goals. You become an expert at juggling and that can sometimes feel stressful.

When you just want to get on and design your game and you have spent all day on the phone to your accountant that can be frustrating, but I guess it's necessary at times.

There is a certain hands-on and arts and craft-style flair to your games, are you influenced by a lot of art outside of games?

Yes, we are influenced by art outside games and I feel our games are richer for it. I believe it's important that games reflect our culture and what is going on in the outside world and it’s always something we strive for in our games.

When you just want to get on and design your game and you have spent all day on the phone to your accountant that can be frustrating, but I guess it's necessary at times.

For example in Lumino City different styles of architecture were a huge influence on the game, and we actually worked with the architect Catrina Stewart who brought a fantastic fresh creative angle to the game.

Keeping with the art theme, is there an influence of origami in Kami 2?

Yes, there is, we have always enjoyed making things by hand and I think that influence came through directly in the game.

One of our artists Steffan even created a paper Action Man version of himself, complete with miniature scalpels, as a job application. Needless to say, we knew he was right for us.

Could you tell us about Kami 2?

The aim of the game is to flood each puzzle with a single colour in as few moves as possible to claim a 'perfect' sticker.

It looks simple, but there are plenty of tricks and surprises to the game. We have expanded the Kami universe with this sequel to include a daily puzzle, plus an ongoing Challenge mode where you can try and get a streak of puzzles perfected. We’ve seen some win streaks of over 2,000 in a row.

The major addition over its prequel Kami is that players can also create and upload their own levels with our Build mechanic.

They’re using the same tools we used to create the main game and to date around two million new levels have been created, with the community still going.

Being able to create something you are passionate about, working with a great team and being able to enjoy what you are doing every day, also to feel that your games have been appreciated among a wider audience.

It is harder to get your game noticed in an increasingly saturated market, but I still believe that a great game still has the ability to stand out and be a success.

Apple’s more feature driven App Store is a great tool to shed light on some undiscovered gems within the store, which I would hope can lift the profile of indies.

We are working on an exciting new narrative adventure, which is our most ambitious game yet, It’s set for release in 2019.

Trust your instincts and collaborate with other people. If you know your strength is coding but your ability at game art isn’t as strong, then other people will notice.

I don’t think it would differ too much from what we are doing now in terms of genre, look and feel etcetera.

We pride on pushing our abilities and the way we develop games is quite different to how other developers in terms of really getting first-hand research and our hands-on approach to game making.

For example, we took a once-in-a-lifetime trip to a very remote place to draw, sketch and photograph research material for our forthcoming game. We’ll release more on that soon. I guess with more budget it would mean more ambitious versions of what we are currently doing.

Trust your instincts and collaborate with other people. If you know your strength is coding but your ability at game art isn’t as strong, then other people will notice.

I see so many games that are excellent in one aspect but are let down by poor art or poor game design.

Handmade dreams: How State of Play crafted its future