"With this genre report, we sought to understand people's motivations for downloading a specific game" 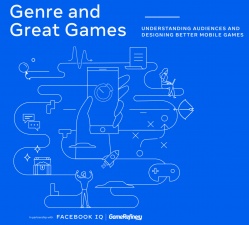 Facebook has teamed up with GameRefinery to take a look at mobile games genres in a new report.

The new data comes from a survey completed by more than 13,000 mobile players across four of the biggest markets for the platform; the US, UK, South Korea, and Japan. Furthermore, it takes a close look at four of the top genres, RPG, hypercasual, puzzle, and strategy.

Currently, genre is the most significant factor in determining whether or not a player tries a new game at 49 per cent. Meanwhile, 40 per cent of smartphone users will try a new title that is recommended by family and friends.

"With this genre report, we sought to understand people's motivations for downloading a specific game, what role community plays in mobile gaming and how gamers respond to ads," said Facebook global gaming vice president Rick Kelley.

"By truly understanding these factors, mobile game marketers and developers can equip themselves with the knowledge they need to continue to generate revenue, as well as create engaging, useful content for their target audiences."

When it comes to the puzzle genre, the report found that women are more likely to play. For example, in the US and UK, almost 75 per cent of puzzle gamers are female and are typically over the age of 35, with six out of 10 in that age range in the same countries. The research showed that women prefer the genre overall due to it enabling shorter game sessions.

It is worth noting that, besides the US – where casino games are most popular – "matching puzzles" is the most-played genre in the researched markets. A staggering 63 per cent of mobile gamers in both the UK and the US play puzzle games while 45 per cent and 38 per cent do in South Korea and Japan, respectively.

Meanwhile, in the US and the UK, 74 per cent and 67 per cent of players respectively claimed to like social aspects of hypercasual games, such as discussing them online and checking leaderboards. In terms of popularity, the genre is most played in the UK at 26 per cent, compared to 24 per cent in the US and 21 per cent in South Korea.

In Asia, RPGs have proven to be lucrative as South Korean and Japanese players spend more money on that genre with 10.9 per cent and 9.3 per cent of respondents having done so respectively. Unsurprisingly, the Asian markets are also where RPGs are most played, as Japan boasts 43 per cent, while South Korea has 40 per cent. Meanwhile, 23 per cent of US players will pick up an RPG, while only 20 per cent will in the UK.

Moving on to strategy titles, it was found that six out of 10 players across the US, UK, South Korea, and Japan would learn how to play a new game with sufficient advertising that demonstrates storyline, gameplay, and characters. It is worth noting that in the respective markets, strategy games are most popular in South Korea with 26 per cent, followed by the US at 23 per cent.

"While insight and data points can be very interesting, they don't mean much if developers can't connect them to specific types of actions and map customer behaviour," said GameRefinery CEO and co-founder Markus Råmark.

"That's why we provide detailed feature analysis in the report, with practical implementation examples from the top 20% of games from each genre. Aimed at both developers and marketers, the research equips them with a broad scope of data to better understand their players, bring back lapsed ones, grow their user acquisition and hopefully create even better game."