The Charticle: Battle of the paid games - Fish Out of Water vs. Cut the Rope: Time Travel 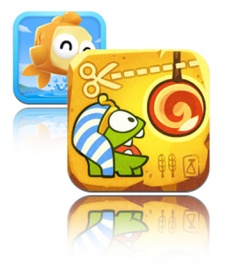 Australian outfit Halfbrick  the developer behind Fruit Ninja and Jetpack Joyride  released Fish Out of Water, a 99c game with in-app purchases.

Russian studio ZeptoLab, meanwhile, launched Cut the Rope: Time Travel, a new instalment in the physics-puzzler franchise with a 99c price tag and IAPs too.

But in this time of free-to-play dominance, which paid game performed better? We examined the App Store charts to find out.

Cut to the chase

So let's not beat around the bush  Cut the Rope: Time Travel climbed higher and faster in the App Store rankings than Halfbrick's effort.

Given the popularity of the Cut the Rope series, and the number of featured spots that status helped secure, it's no surprise that ZeptoLab beat out Halfbrick's new IP.

Within 24 hours of launch, Cut the Rope: Time Travel was #1 in the paid apps chart, and at the time of writing, it remains in pole position.

But Cut the Rope's dominance in the paid downloads chart hasn't translated into an especially high position on the grossing charts.

ZeptoLab's latest reached #40 in the top grossing games rankings at launch, and surged to #27 in the days that followed. Since then, however, the game has slid back to #28.

But although Cut the Rope has generated more downloads than these two games every day since its launch, both Minecraft and TMNT are ranked much higher in the top grossing games chart than ZeptoLab's effort.

For Mojang's indie world-builder, price is the winning factor.
Minecraft may have been downloaded fewer times than Cut the Rope: Time Travel in the past week, but Minecraft has a $6.99 price tag.

This alone (the game has no IAPs) is enough to secure Minecraft: Pocket Edition seventh place in the top grossing games chart at time of writing.

That may go part way to explaining its superior grossing charts performance, but the title's virtual currency IAPs may have also been a more compelling proposition than the in-game power-ups (effectively level skips) that Cut the Rope offers for purchase.

All of which suggests that ZeptoLab may have left some money on the table. Despite being the most popular paid game since its launch on the US App Store, it's only the third top grossing paid game.

Conventional wisdom suggests that freemium would be the surest path to increased revenues for ZeptoLab, but it seems that a higher price tag might also have worked for the developer.

Fish in a barrel
Fish Out of Water, meanwhile, climbed to #4 in the top paid apps chart at launch. Two days later, by the time its 'opening weekend' had rolled around, the game had slipped to #5, where it remains at the time of writing.

Halfbrick's new IP entered the top grossing games chart at #70 and rose to #56 by Saturday 20 April.

That position remains the game's highest to date, and it currently rests at #62 in the top grossing games chart, lagging behind other paid titles such as Temple Run: Oz, Scramble with Friends and Bloons TD 5.

Analytics graph showing Fish Out of Water's performance on the US App Store's top grossing charts.

According to Distimo estimates, Fish Out of Water generated roughly $45,000 on the US App Store between its launch on 18 April and its grossing chart peak on 20 April.

That's not bad of course, but given the scale of Halfbrick's previous successes, it's certainly anticlimactic.

It's also surprising to see the developer eschew free-to-play, given that the company successfully transitioned Jetpack Joyride from premium to freemium in late 2011.

Besides a premium price point, one thing that Fish Out of Water and Cut the Rope: Time Travel have in common is that they are both the products of developers that achieved great success with paid apps in the past.

Today, it's highly unusual for paid games to enjoy such huge, and sustained, success. The rise of free-to-play has changed the industry - and the App Store charts too.

Of course, it's too soon to tell how Fish Out of Water and Cut the Rope: Time Travel will perform in the long term, and both developers can clearly still deliver the goods in the gameplay department.

Whether the two studios would be better served by a change in monetisation strategy, however, is another matter. 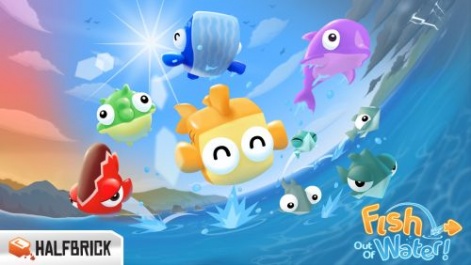